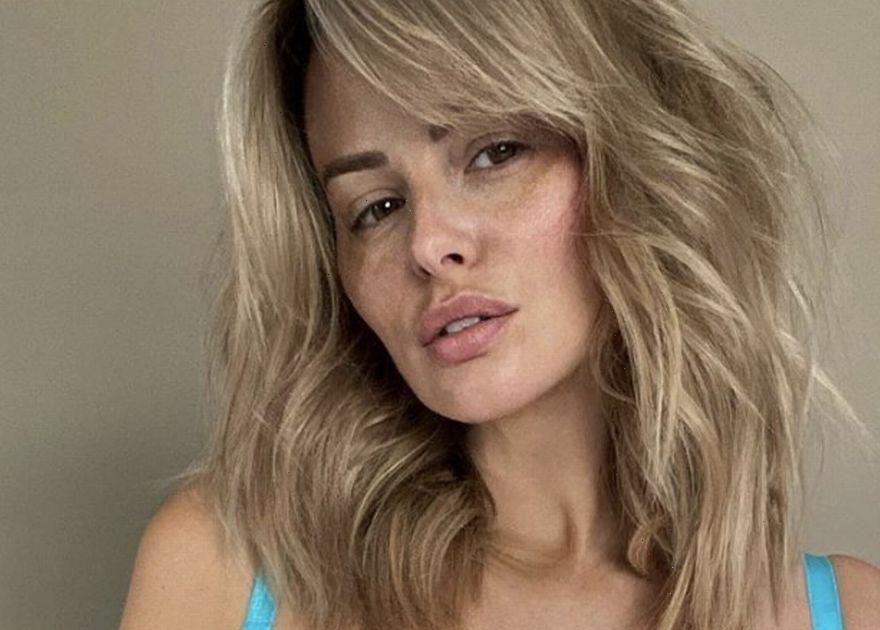 Lads mag legend Rhian Sugden is no stranger to a sultry snap, having posed for various photographers over the years with her face being plastered on top-shelf magazines.

While she may no longer be an active Page 3 model, she frequently sends her social media followers into a frenzy thanks to her racy snaps and her latest upload is certainly no different.

Rhian, 34, left very little to the imagination as she posed up a storm in some rather revealing lingerie that almost risked the wrath of Instagram guidelines.

The blonde bombshell oozed sex appeal as she offered a sultry gaze towards the camera while posing in her lingerie.

Bury-born Rhian's bulging bosom took centre stage in her smouldering snap as she pushed her chest out while pouting towards the lens.

Rhian's sizzling lingerie was decorated with blue crystals and pink flowers, carefully protecting her modesty as she uploaded the snap for her 466,000 fans.

The star, who is married to Coronation Street actor Oliver Mellor, appeared to go makeup-free as she flaunted her natural beauty while her luscious blonde locks were styled into loose natural waves, resting carefully on her shoulders.

Her post, that has since racked up thousands of likes, was instantly flooded with compliments from her adoring followers.

One wrote: "You absolute tease," alongside a heart emoji.

While a second went on to add: "OMG INSANE," with a fire emoji.

"Nice lingerie, you look so beautiful and attractive," said a third.

Before another exclaimed: "Wowzers."

Last week, Rhian revealed that she was struggling to put a "brave face" on as she opened up on the devastating impact of IVF.

Taking to the photo-sharing site, she wrote: "Been feeling blue. Had a hell of a tough few weeks…

"For those that have been following my journey… IVF round 4 failed but it's now time for me to pick myself up and carry on!"

She continued: "Being in the public eye and trying to keep a brave face on is harder than it looks but I’ve done it many times before and I will do it again.

"It's time to stick on my best undies, get myself back to normal and get back behind that camera doing what makes me happy! Big shout out to my support network. You're the best! #ivfwarrior."

In 2019, Rhian received the shattering news that her egg count was similar to that of "a woman over 45".

This meant her chances of conceiving naturally were estimated to be low so she and Oliver signed up to IVF, knowing that the procedure only carries a "2%" success rate.