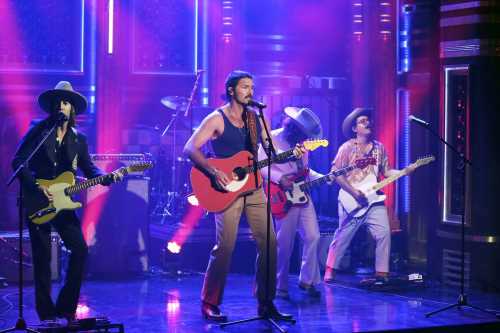 From afar, it looked as if the trio couldn’t agree on what to wear, as guitarist Jess Carson and bassist Cameron Duddy both sported suits and cowboy hats, while lead singer Mark Wystrach decided sleeves were apparently too cumbersome for late-night and opted for a tank top. It’s the members’ unique personalities, however, along with their zero-fucks approach, that can make a Midland TV appearance something memorable. Often by-the-numbers, TV spots become blank canvases for Wystrach, Carson, and Duddy, who took the opportunity to dramatically throw his hat before the instrumental break — only to have it hit a wall and bounce back to the bassist’s feet.

The Tonight Show audience, and the host Fallon, seemed to enjoy the spectacle of it all, giving Midland a standing ovation at the end of “Mr. Lonely.”

Midland will release their new album Let It Roll, the follow-up to their debut album On the Rocks, on August 23rd. The group will kick off their Let It Roll Tour on September 17th in New York City.