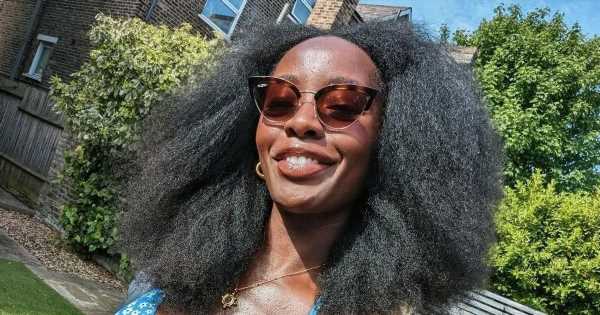 She rarely lets a week go by without updating her loyal legion of fans with a scorching snap on our Instagram feeds.

And Monday’s post (January 23) was no different after AJ Odudu decided to melt the internet all over again when she shared a sizzling snap from her trip to Columbia.

The TV presenter’s photos regularly command the attention of her 228k followers, but her latest has certainly struck a chord as they flooded her with compliments online.

Taking to her Instagram Story, the raven-haired beauty shared a slew of holiday snaps where she paraded her washboard abs in a tiny string bikini.

AJ opted for a bright orange two-piece which she styled with a green and orange sarong and a pair of designer sunglasses as she soaked up the sun.

She styled her luscious locks into beautiful braids which cascaded over her shoulders and down to her waist.

And it appears as though she maybe struggling in the heat as the former Strictly star could be seen working up a sweat on her sun-kissed holiday.

In another snap, the 34-year-old star could be seen precariously walking along the stump of a fallen tree surrounded by crystal clear seas as she flashed her pearly whites to the camera.

Later on, the loveable northerner could be seen watching her cares fade away as she sat down on a beachside swing while the sun set behind her.

AJ landed in the vibrant country on Friday as she shared her summary of snaps that she had documented from her trip so far. It didn’t take long before her famous friends and adoring fans flooded to her comments section to shower her in compliments online.

One user penned: “I LOVE THAT CITY SO MUCH. Have the best time” as another added: “Every damn slide!! So jealous – Columbia on the bucket list fo sho.”