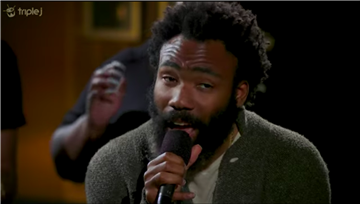 For his take on “Lost in You,” Glover layered the tune with more soul and harmony with help from his backing band and singers. The musician managed to turn the campy moodiness of Gaines’ original into earnest balladry, as if the song had been originated by any number of Nineties R&B heavyweights.

Glover, who recently starred in Disney’s remake of The Lion King alongside Beyoncé, Seth Rogen and Billy Eichner, is currently in Australia headlining the Splendor in the Grass festival. He will headline Lollapalooza this weekend in Chicago.

Garth Brooks embodied Chris Gaines, his fictional, troubled rock persona, for exactly one album cycle. Gaines released The Life of Chris Gaines in 1999, starred in a faux Behind the Music episode and even served as the musical guest on Saturday Night Live (with Brooks appearing as the host). While the Gaines album received mixed reviews, “Lost in You” is technically Brooks’ only Top 40 single.