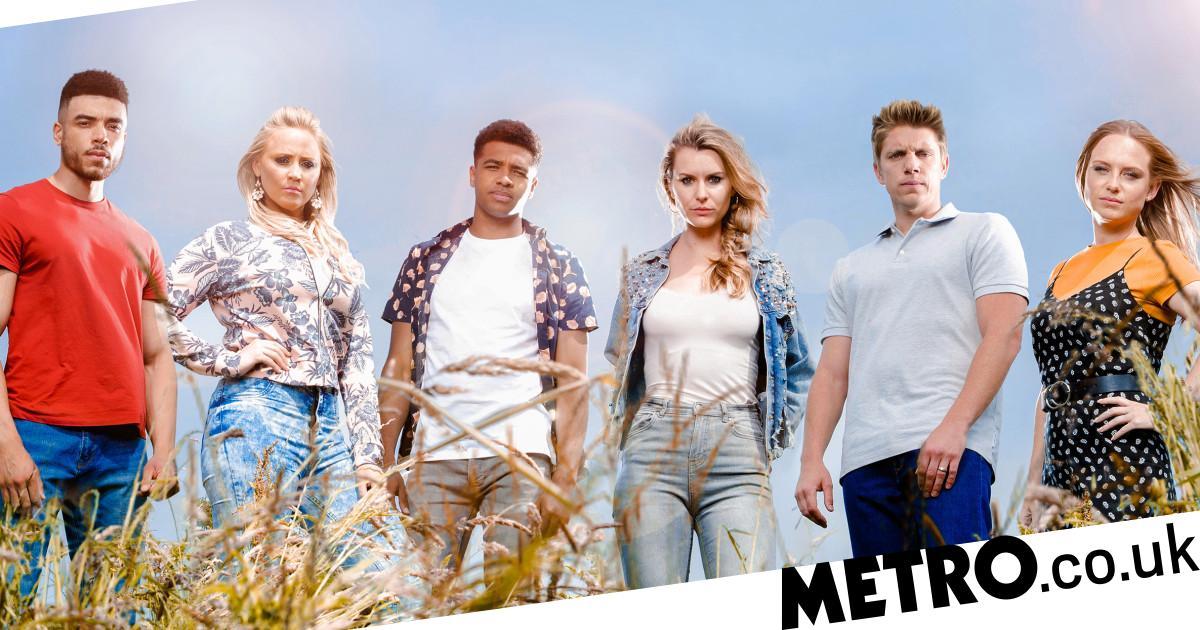 Summer is going to be huge this year in Emmerdale and the heat is really turning up – very literally, as a terrible fire takes hold and puts lives on the line. As at least one character dies in grim events, the beginning of the end for Robert Sugden (Ryan Hawley) commences while there’s the welcome return of Mandy Dingle (Lisa Riley), a dramatic new project for Kim Tate (Claire King) and Chris Bisson (Jai Sharma) – and several special weeks, including the standard colossal October week which will see Moira Dingle’s (Natalie J Robb) affair revealed to Cain (Jeff Hordley) in sensational fashion.

Metro.co.uk recently spent an action packed day in Emmerdale village, gathering interviews to carry you through the summer months. And while many twists are being held back from now, executive producer Jane Hudson was on hand along with producers Kate Brooks and Laura Shaw were on hand to deliver snippets of what we have to look forward to.

Speaking about a major summer week at the end of this month, Laura shared: ‘We have a big week at the end of the month – Emmerdeadville as we call it. Bernice organises a Wild West murder mystery event. It’s in aid of the local hospital but in true Bernice style, she has more than local charity on her mind – such as love and Dr Cavanagh. We’ve seen Bernice in lucky in love quite a lot – will she find love with Dr Cavanagh? I certainly hope so.

‘Not having such a good time is Victoria whose evil rapist Lee is still pursuing her. Victoria decides the only way to get away is to leave the village forever. Robert is devastated and doesn’t want her to go. Lee piles the pressure on her and Robert has been pushed to the edge and he is on a mission to get his revenge on Lee even if it kills him.

‘Ryan Hawley is leaving the show – it’s been a fantasttic five years with him and we will miss him dearly. There is some time left with him on screen yet but in time, it does mean that our beloved Robron are going to be parted. You’ve seen in the past what happens with Aaron when he unravels so when he is parted from his beloved Robert, it’s going to be explosive.

‘Also in the week we have Sharma drama as a fire rips through the factory. It’s caused by two of our villagers who are up to no good behind Jai and Rishi’s backs. Unbeknown to anyone, Tracy is trapped in the factory and as the fire takes hold, there’s a huge explosion. Will Tracy get out in time? It’s safe to say there are heartbreaking scenes ahead for the villagers and Tracy’s life will never be the same again.’

Emmerdale always goes big in October and this year is no different, with a huge week focusing on the reveal of Moira’s affair to Cain. Kate teased: ‘Those of you with eyes might have noticed something going on with Nate and Moira – there are a lot of heated moments over hay bales. It might come as no surprise that they are going to have a full blown affair. It’s going to be dangerous, very steamy and ruffles a lot of feathers in the village. Moira is married to ultimate bad boy Cain, so when he does find out, it will be explosive and there will be lots of drama and ramifications for all characters involved. We get to the core of why this affair has happened and the ramifications of it.

‘This will all come to a head in October – we like a big week in October to set the autumn schedules alight. This will all come out then and honestly, it’s a massive week of drama. It’s very story led – a lot of tears, a lot of action and a lot of heartbreak. Meanwhile, we do every so often have happiness and this comes in the form of a new little Dingle. Paddy and Chas will have their baby in a happy and joyous occasion. This being a soap, it doesn’t all go smoothly – there will be comedy and japes. It’ll bring a new lease of life for the family as there is a lot of darkness around them at the moment. It injects new life into them and will be lovely to watch. After the heartbreaking story we had for Paddy and Chas last year, this will be a very welcome addition to the family.

‘Meanwhile, over at Home Farm – it remains a hub of lies and betrayal but Kim strikes up a business partnership with Jai after the fire. Getting in bed with Kim Tate is like getting in bed with the Devil herself so it won’t be plain sailing for him. They are planning a new outdoor pursuit centre at the heart of the village – there will be kayaks, segways, a nice little eatery and will look fantastic and rejuvinate the village. It will bring new characters into the village and they can all have fun in the treetops and zipwires.’

And what else? A big return, a newcomer and an explosive Christmas!

Jane finished by saying: ‘We’ve got a new character joining the show – Al. He is going to bring back some memories for Ellis and cause a bit of trouble and be very much in everybody’s way. We’ve got Lisa Riley returning – Mandy and Vinny are back with scams and all sorts going on and we’re very excited about that. It’s going to be very fun and colourful as she makes herself at home.

‘We’re currently storylining Christmas – we also have lots of secrets, lies and revelations; everything we have been building up to explodes at Christmas time. That leads us into another special week at the start of next year so we have a hell of a lot going on, it’s fair to say.’