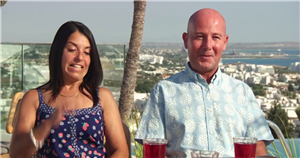 A Place in the Sun viewers were left fuming when a couple made an offer on a property in Cyprus that was £15,000 below the asking price.

In the episode of the Channel 4 show on Thursday (May 20) Maria and Andy were looking to permanently relocate to Famagusta after first meeting in the area 20 years ago and even getting hitched on the island.

Property expert Jean Johansson was on hand to help and after a rocky start, including a house they stopped viewing midway through because of the swimming pool, the couple found their perfect home in Avgorou.

The £134,091 two-bed detached house, which was the second they viewed, had a balcony to the front and a private pool in the back.

Maria seemed to like it and said it was "nice and quiet," before telling Jean: "Great first impression".

Andy spilt the beans and told Jean they had already had a sneak peek of the villa online and like it even better in person.

"Massive improvement from earlier," he said.

The couple were not sure the outside area was secure enough for their pedigree cat, Keo, and the master bedroom lacked an ensuite, but otherwise, they couldn't find much fault with it.

Unfortunately, the same couldn't be said for the next three properties and so the villa in Avgorou turned out to be the only true contender.

At the end of the show, Andy and Maria told Jean they would like to make an offer.

Andy and Jean then explained they had to factor in the extra cost of making cat-proof fencing.

Maria said: "It was the security for Keo. We need to get it properly fenced in."

Jean phoned the agent with the couple's offer and it was turned down, as was their subsequent higher offer and the one after.

Their final offer of £138,000 was finally accepted, getting them closer to their dream of living in Cyprus forever.

It seemed viewers at home were not happy with the result, with many of them venting on Twitter.

"Jean looks p***ed off that she had to put such low offers in," said another viewer.

A third fan commented: "15 grand below the asking price? Are these pair taking the p***?"

"I hope they get laughed out of Cyrus at that offer!" tweeted a fourth viewer.