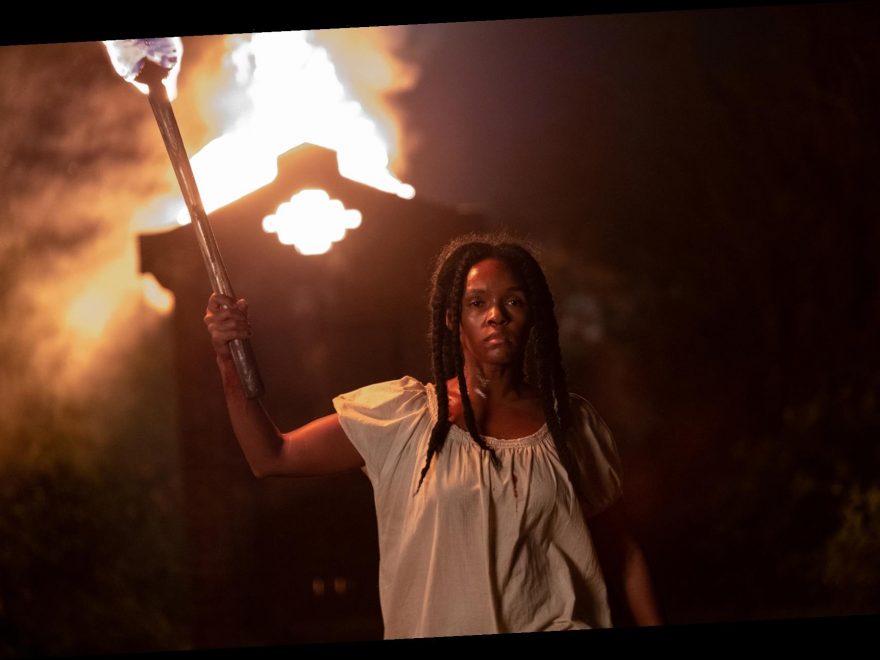 Gerard Bush and Christopher Renz’s Antebellum begins where you can rightly expect a film with a title this brash to begin: on a plantation. This is the kind of movie that makes a point of throwing its audience, to say nothing of its characters, into the deep end.

And so, in the disconcertingly smooth and showy tracking shot that opens the movie, we’re treated to American chattel slavery’s greatest hits, the summarizing details spilling out onscreen like a neat cascade of bullet points. The proud march of Confederate soldiers; the gendered dehumanization of enslaved black people in chains. The big house, wide fields, the blood- and tear-streaked crops, the vicious plantation beauty. The tracking shot ends, but the scene doesn’t: We have a violent separation and heartless murder yet to witness, the horrifying creep of a noose-like lasso to watch tighten itself around a neck in exaggerated slow motion.

Suffice it to say Antebellum’s plantation scenes are some of its weakest. The movie, which stars Janelle Monáe as professor Veronica Henley, is far from entirely set on a plantation; this is a criss-crossing narrative with some surprises up its sleeve. But as the above suggests, the terror of enslavement, particularly as experienced by black women, is the movie’s prevailing subject, and so is much of what you might expect to accompany that well-trod ground, including white American rage and a discomfiting desire to relive the past.

How the movie gets there is not fair to spoil. What can be said, however, is that the beginning of the movie is hardly the beginning of the ordeal it depicts. And, bolstered by the strength of its admirable and talented cast — which includes Kiersey Clemons, Gabourey Sidibe, Jena Malone, Tongayi Chirisa, and Jack Huston — the movie is good at getting a good number of ideas going at once.

This is in part a credit to Antebellum’s amalgam of influences, which are perhaps the most intriguing thing about it. With its insistence on courting the gaze of a specifically black audience, with its sinuous mix of horror and racial commentary, Bush and Renz’s project of course earns comparison to Jordan Peele’s Get Out, a phenomenon whose global success can safely be credited with making the green-lighting of projects like Antebellum much more viable to begin with. More interesting, though, are the connections to a broader cultural lineage. Fans of the late, great Octavia Butler’s pioneering speculative fiction will no doubt notice the premise’s similarity to that author’s 1979 novel Kindred, in which a 20th-century black woman finds herself transplanted to the Antebellum south and forced to reckon not only with the thorns of her own racial ancestry, but with the real violence of enslavement — violence that surpasses analogy or allegory and which implicitly indicts the risks of modern ignorance. Case in point: the novel opens with its heroine missing an arm.

There’s also something to be said for the ways that Antebellum’s broad, ironic arc — not from slavery to freedom, but rather the nightmarish reverse — owes a great deal to the specific form of enslavement documented by Solomon Northup, whose Twelve Years a Slave: Narrative of Solomon Northup (1853) inspired Steve McQueen’s Oscar-winning 12 Years of a Slave and provides a psychological road map to the terrors Antebellum is dredging up. Being born into enslavement is hard enough to wrap one’s mind around. But the idea of being snatched from freedom and progress is, for any beneficiary of these privileges, somehow even more unimaginable — maybe even more terrifying, because it literalizes the fear at the heart of anyone who knows that all freedom is malleable: that it always comes with a price, with one such price being the terror of losing it.

At its heart, and at its best, Antebellum is a grand play on what we know people really mean when they shout to “Make America Great Again.” If, for you, a return to America’s past is an especially dangerous prospect, there’s no way to hear this slogan but as an explicit call for social progress to be reversed, for freedom to be re-denied, for racism and other forms of bigotry — none of which have left us — to again enjoy the impunity of a suppressive social order. It is, for many, a terrifying thought.

What also cannot be denied, because it has by now been made imminently clear, is that some people would all too happily enjoy the privilege. Which is why Antebellum also can’t help but bring to mind franchises like Westworld, and everything that its premise, in which rich people get to cosplay America’s lawless frontier West for kicks, seems to invoke.

One thing Antebellum’s panoply of influences have in common, explicitly or not, is a distinct interest in class privilege — an interest Antebellum shares, but not without some cringe-inducing complication. The movie is rife with class signifiers: from the size and abundance of Veronica’s family home, to her professional status as an academic and public intellectual, to the yoga and veganism, the Ubers and champagne populating her everyday life. The movie doesn’t forget to draw a line between the role this plays in making her a target for what is going to happen to her over the course of the movie.

But it wears this connection a little uneasily. Rather, it seems to take a few things about capital — the beating heart of slavery — a little too easily for granted. In recent years, it’s begun to feel too easy for the empowerment-forward professional class to wield historical disenfranchisement, and slavery most especially, as a metaphor for contemporary social ills. It is very much the case that slavery by another name, as the journalist and author Douglas A. Blackmon has put it, exists in the present; much of modern freedom is still made possible by forced labor.

Slavery is what ought to come to mind when we hear of incarcerated men being conscripted to fight our nation’s wildfires, protecting the homes of the free when they are not free. That’s to say nothing of the slavery that still exists worldwide. As recently as this week, Kanye West has likened the music industry to a form of enslavement and the NBA to a slave ship, images that are only as rhetorically powerful as our ability to overlook the immediate, incomparable reality of wrought-iron chains.

Maybe these questions, which are questions of ideology, would find finer resolution in a movie that kept a closer eye on the rich nuances of its characters. But this is where Antebellum not only fails but, at times, flails — in part because the details it provides, the interactions in which the film grounds itself, keep getting bulldozed by the locomotion of its plot. There’s a sense that Veronica’s time on the plantation needn’t be overly elaborated, because we all know how life in a plantation is meant to play out. But the view of plantation life we get is — it’s difficult not to notice — primarily concerned with the humiliations faced by black women, specifically, while in the same moment not especially rigorous or careful in the ways it details that humiliation. All that these women have to show for the pain, in the end, is a high body count.

A somewhat-exception, and probably the most electric stretch of the movie, is a dinner between Veronica and a pair of colleagues (including Dawn, played by Sidibe), in which a man sending a drink to the table results in an eyebrow-raising show of flirtatious entitlement. Sidibe’s character overall risks colliding a bit unfortunately with the stereotype of the louder, sassier sidekick to a skinny lead, and this movie isn’t absolved from that. But there’s real abrasion in what Sidibe offers the scene, which starts with her berating a white waitress and calling her Becky. On the other hand, we’re encouraged to sit, for a moment, with a chilling idea: that Veronica and Dawn risk being punished, not only for being black women, but for daring to be demanding and confident black women — and daring to make demands, even rude ones, of white people.

Of all the movies one could recall at that moment, I thought back to Green Book, and to the truth it wears on its face, apparently unbeknownst even to the movie: that few things can seem more vexing or infuriating to latent white racism than the merest idea of black “privilege,” the slightest hint of a black way of being that refuses to accept secondary status or know its place. Antebellum, to its credit, makes this tension somewhat explicit. But in its barreling toward what begins to feel like a foregone conclusion, it cuts its exploration of that idea painfully short.

The movie isn’t without its climactic satisfaction: It offers black audiences the escape hatch of reciprocal violence that revenge narratives deploy as a rule. But even this gets marred a little when the complex pleasure of vengeance is doled out in a conclusory overdose of beauteous empowerment imagery. For all its fiery comeuppance, the end of the movie is wanting. It’s a neat bow on the story it tells. But the tragedies at its center tumble on, unaffected.