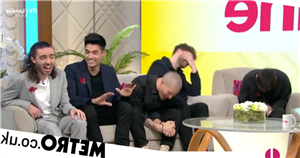 The host, 61, had been chatting to the band about their comeback and Tom Parker’s brain tumour battle, but the interview ended up descending into giggles when they ended up copping an eyeful by accident.

After discussing their latest music video for Rule The World, Lorraine interjected: ‘Listen, I’m so sorry, my top button popped with excitement!’

Jay McGuinness cheekily retorted: ‘That was directly in my field of vision, too. I’ll keep my hand in my lap!’

Lorraine laughed: ‘I’m so sorry about that, you young boys don’t need that of a morning!’

However, the band found the whole thing hilarious with Tom adding: ‘We do! It was fantastic!’, while Siva Kaneswaran joked: ‘It certainly woke us up!’

The unfortunate mishap left Lorraine so flustered she couldn’t get her words out, finishing the interview in floods of laughter as she told them: ‘Thank you both – all of you! Both?! What am I saying, oh! You guys are fantastic, thank you so much.’

Earlier in the interview the band had discussed reuniting after seven years for an emotional concert to raise funds for brain tumour research in September.

Tom, 33, had been diagnosed over a year ago and recently got the positive news that his stage four glioblastoma brain tumour is ‘stable’ after chemo and radiotherapy.

The band are set to he’d out on tour next year and Max George revealed that the driving force behind the band is still Tom, just as it had been before.

He revealed: ‘From day one at the start of the band, Tom’s always been the leader and the one that we look up to, and even now.

‘I know when people talk about us being back in the band and we’re doing it because Tom’s not well and it’s to lift his spirits, Tom’s still at the forefront of this group.

‘Nothing’s changed in the dynamic and the fact that he just gets on with it and he’s still the same and to be a part of the show that he put on and to be on that stage next to him – he set this up. It was so cool, we’re mega proud of him.