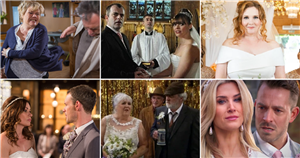 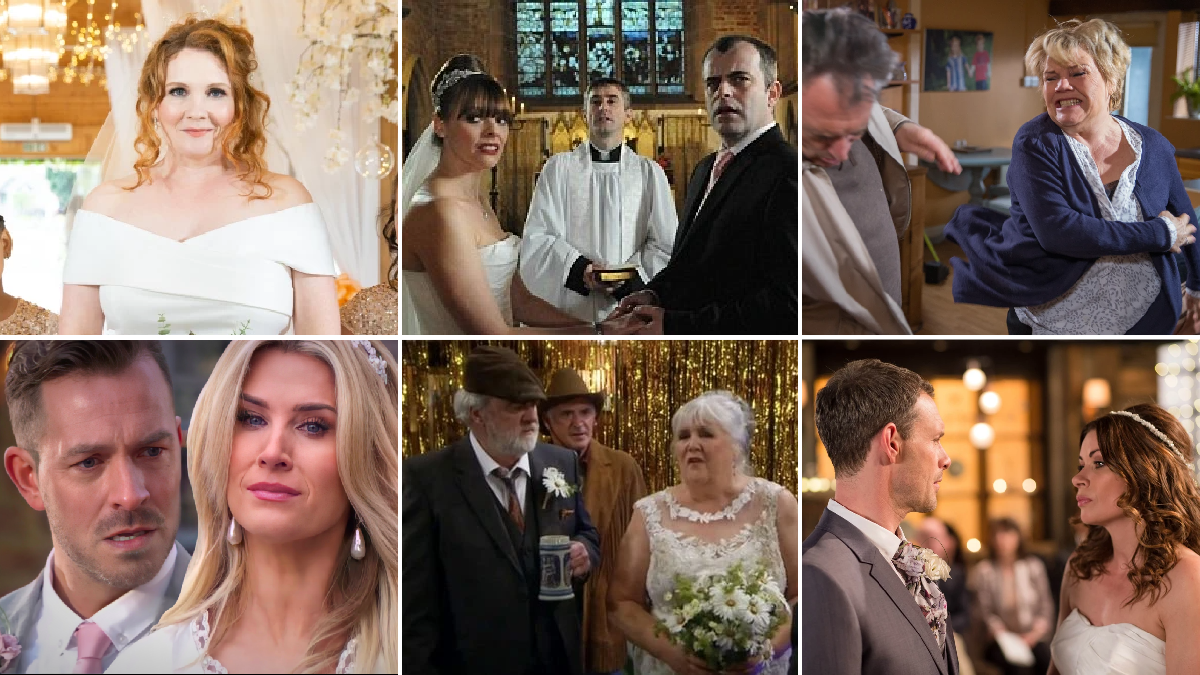 Of course, this isn’t the first time a soap marriage has ended so quickly. While in real life, you can safely assume the bride isn’t going to make a run for it, it’s a very different story in soapland. So here’s a look at all the unions that were over before they could even begin.

EastEnders’ Mel Healy (Tamzin Outhwaite) loved Steve Owen (Martin Kemp), but agreed to marry smitten Ian Beale (Adam Woodyatt) instead. When it became clear that Mel was on the brink of breaking things off, Ian told Mel the sick lie that his daughter Lucy had cancer.

The nuptials went ahead, but Mel confronted Ian with a hospital letter during the reception. Ian admitted that he had just wanted to stop Mel walking away; and Mel coldly proclaimed that she had never loved Ian, dumping him just as Walford rang in the millennium.

Mercedes and Russ destroyed by cheating in Hollyoaks

Nearly a decade later, Mercedes and Russ reconnected, but it was Russ who did the dirty with Mercy’s relative, Goldie (Chelsee Healey) – even forcing her to have a termination when she fell pregnant.

The secret was exposed just after the vows, and Mercedes ditched Russ with a typically savage take-down. He was then murdered for his sins by Goldie’s serial killer mother, Breda (Moya Brady).

The pair had heated confrontations with Brenda, and Laurel had second thoughts about being with him; so a guilty Bob married Brenda anyway. But she saw how unhappy he was and called the whole thing off during the reception.

Tracy Barlow’s (Kate Ford) wicked lies destroyed her first go at happiness with Steve McDonald (Simon Gregson). Tracy threw herself down the stairs of nemesis Becky’s (Katherine Kelly) home and lied that Becky pushed her, causing her to lose the twins she was carrying.

Steve and Tracy got married, but as Steve toasted his new wife in the Rovers, his ex Becky used Tracy’s medical records to publicly prove she had miscarried long before the accident. A furious Steve immediately ditched Tracy, leaving her sobbing in the Street, while Becky left the cobbles with her head held high.

Janine pushes Barry off a cliff in EastEnders

Ruthless Janine Butcher (Charlie Brooks) seduced Barry Evans (Shaun Williamson) in a scheme to get hold of his money, all while she continued a relationship with accomplice Paul Trueman (Gary Beadle). Convinced that Barry’s heart condition would kill him, Janine became Mrs Evans.

But as they took a walk on the Scottish hills the next morning, Barry joyfully explained that his illness was a false alarm. Horrified, Janine told him she felt nothing for him, shoving him away and off the cliff when he refused to believe her. Barry landed in a heap at the bottom, and Janine callously watched him die.

Mandy ordered vulnerable Charlie to keep quiet, convincing him no one would believe the truth. Darren and ex Nancy (Jessica Fox) discovered everything minutes after he made his wedding vows to Mandy. Her manipulation of Charlie disgusted Darren, and he dumped her.

Lisa passes away after remarrying Zak in Emmerdale

Zak Dingle (Steve Halliwell) wed Joanie Wright (Denise Black), but realised they weren’t built to last and that he still loved ex-wife Lisa (Jane Cox), who luckily for Zak agreed to take him back after his cheating. Sadly, the beloved matriarch was later diagnosed with a terminal condition.

Lisa and Zak reaffirmed their love and became man and wife again, but he and their daughter Belle (Eden Taylor Draper) were heartbroken when Lisa passed away in her sleep after popping home during the festivities. There’s no sadder soap wedding…

Nick Tilsley (Ben Price) and Carla Connor (Alison King) were due to marry in a romantic ceremony at the Bistro. But Carla had cheated with Robert Preston (Tristan Gemmill), and Robert’s on-off partner Tracy Barlow found out.

Tracy crashed the wedding, revealing Carla’s infidelity to Nick. Nick kept his cool, but faltered when Tracy added that Carla had paid her and Robert off. Nick went through with the nuptials; but during the toasts the doubts crept in and he couldn’t forgive Carla.

Alfie Moon (Shane Richie) moved on from the heartache of his marriage to Kat Slater (Jessie Wallace) with best mate Roxy Mitchell (Rita Simons). Roxy was besotted with Alfie, and after they set up home together in the Queen Vic, Alfie proposed.

It was clear that Alfie had never got over Kat, but he went through with the ceremony. Moments after being declared husband and wife, however, Roxy stopped the day in its tracks. She urged Alfie to go after Kat, who had left to board a flight. Alfie agreed, and was reunited with Kat on the plane.