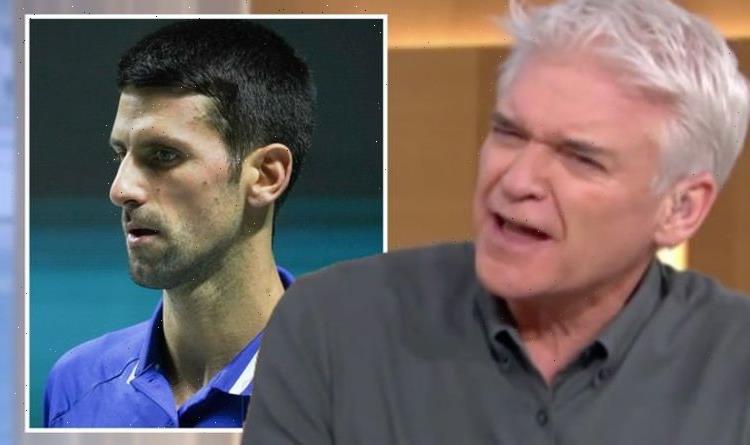 Just hours after a court overturned the cancellation of his Australian visa, Novak Djokovic’s place in the Australian Open still remains shrouded in controversy. The former Wimbledon champion had been detained in Australia for failing to comply with the country’s vaccine requirements and despite the court ruling, unconfirmed reports emerged from a Serbian journalist that he’d been arrested while Australia’s Immigration Minister Alex Hawke still has the power to cancel Novak’s visa once more. Discussing the predicament on ITV’s This Morning, hosts Holly Willoughby and Phillip Schofield shared their thoughts.

Holly and Phillip had welcomed guests Vanessa Feltz and Gyles Brandreth onto the programme to discuss the latest headlines and it didn’t take long for the tennis player to be brought up.

And it soon became clear the ITV panel struggled to grasp exactly what was going on, with Vanessa claiming Novak’s “exemption claims” didn’t “seem to hold water”.

“Confusion does reign,” Gyles agreed before admitting the strict Covid rules in Australia have proven to be a “nightmare”.

“So that’s the reason it’s a big storm,” Gyles added before Holly weighed in: “What will be fascinating will be what happens from here.

“But I imagine it’s going to be a colossal vote winner potentially, isn’t it? To lock him back in again or chuck him out.

“Whichever minister is in charge is going to really fancy doing that, aren’t they? It’s going to look really attractive if they do do that, so I don’t know what chance (he’s got).”

At this point, Phillip weighed in with his own stance and it’s safe to say he felt the entire saga could’ve been dealt with differently.

“It’s certainly one of those things that you look at and think, ‘How complicated could you all have made this?’” he began.

Phillip continued: “So if we have a look (and say), ‘Right, okay, are you exempt? Should you be exempt? No, you’ve gotta go’.

“Or actually, ‘This all works’. I mean, surely you would think that could’ve been done in an office in an afternoon?” Phillip blasted.

Vanessa then claimed: “Isn’t it money that always muddies these waters?

“Isn’t it all about money and how much money and the financial investment is there in his playing?

“Everybody wants to see him play, it’s where the big bucks are,” Vanessa raged.

This isn’t the first time the tennis star has sparked debate on the ITV show, with viewers divided on the star’s place in the competition.

On Friday when stand-in hosts Alison Hammond and Dermot O’Leary first discussed the story, Twitter user Sara argued: “Novak Djokovic is not above the rules.

“He doesn’t want the jab, fine, but that means he takes the consequences #ThisMorning.”

While Elizabeth Scott argued: “#ThisMorning Novak should be allowed in. The vaccinated still spread the virus and they’re supposedly protected anyway. If he has a negative test it should be enough!!”