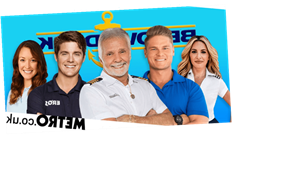 Below Deck season 8 will be setting sail very soon for another instalment of sight-seeing, travel and drama – emphasis on the drama.

The cast has not yet been announced, with viewers in the dark over exactly who will be climbing aboard this year’s stunning motor yacht.

With chief stewardess Kate Chastain announcing her departure from the franchise at the end of a wild series seven – we’re still not quite over that reunion – all eyes will especially be on her replacement.

Side note: They will have some big epaulettes to carry.

But, after seven years at sea, who has risen up the ranks to be named on the dream crew?

Have your say below.

As this is based solely on Below Deck and not spin-offs Below Deck: Mediterranean and Sailing Yacht, Captain Sandy, Captain Glenn and Captain Mark are not eligible for the vote, meaning Lee Rosbach has automatically been named as our dream Captain.

Below Deck is available to stream now on HayU.