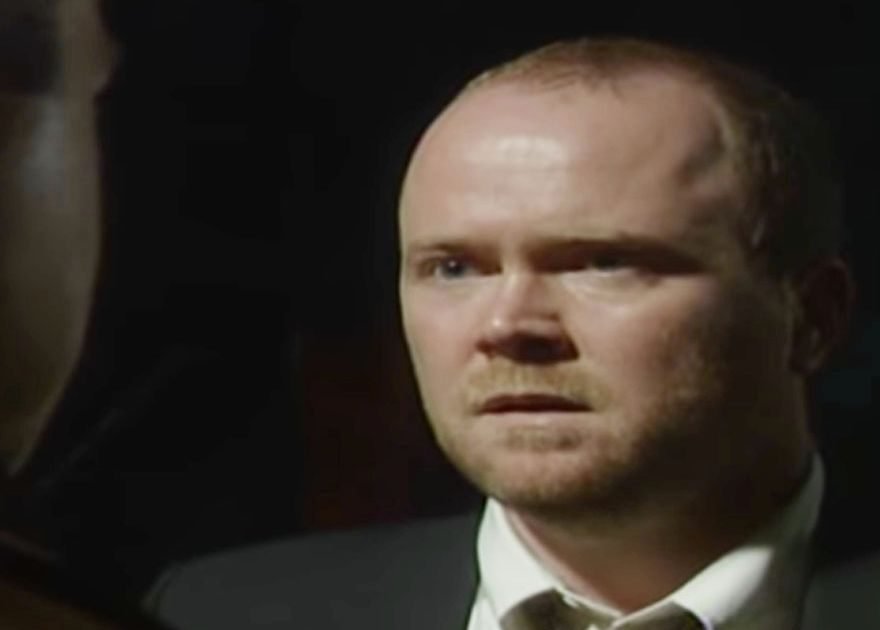 Tonight sees the mechanic attacked and left for dead, with the finger pointing at everyone from his son Ben Mitchell to mouthy diva Kat Moon.

But it won't be the first time Phil (Steve Mcfadden) has been rushed to hospital clinging to life.

The baddie's 29 years on Albert Square have seen him throttled, burned and shot in broad daylight by an every-growing list of enemies.

Unwilling to have a baby with a violent Grant and intimidated by his thuggish behaviour, Sharon Mitchell instead turned to her husband's brother Phil for comfort.

The pair embarked on a lusty fling, but she ultimately refused to leave Grant and everyone moved on.

Until she got caught on tape telling friend Michelle Fowler all about their torrid affair – and the tape ended up in the hands of Grant, who played it to the entire Queen Vic.

Livid with Phil, he attacked him so violently that he was left with a blood clot on the brain and a ruptured spleen.

He was right as rain after a few days in intensive care mind.

Phil and Grant eventually made up and blamed Sharon for the whole debacle.

But Grant clearly wasn't over it and bedded Phil's wife Kathy Beale as revenge.

The truth came flooding out as the brothers drove through London, prompting Phil to shoot the dashboard and Grant to plunge the vehicle into the Thames.

Phil was later rescued but Grant couldn't be found – although it later emerged he'd high-tailed it to Brazil.

Some 22 million viewers tuned in to find out who gunned down Phil outside his own home.

A mystery assailant was seen knocking on his door and shooting him in the back as he turned to walk back into his home.

His step-son Ian Beale and ex-business partner Dan Sullivan were all in the frame.

But the most likely culprit seemed to be love rival Steve Owen, who married Mel Healy that day – despite learning she'd bedded Phil.

However, it turned out to be Phil's long-suffering girlfriend Lisa Fowler who pulled the trigger.

Heavily addicted to crack cocaine, Phil became a liability and was locked in the pub to detox by his landlady mum, Peggy Mitchell.

But he managed to escape and set fire to the pub with himself, Stacey Branning and her daughter Lily inside.

The mother and daughter eventually escaped from an upstairs window, but Phil was trapped under a beam and only hauled out at the last minute by Peggy and his cousin Billy Mitchell.

After years of taunting and bullying Ian Beale, it was no wonder the chip shop owner decided to just standby and watch as Phil writhed around clutching his heart.

Phil had been threatening to expose Ian's affair with Roxy Mitchell's mum Glenda to his wife Laura, making his death the perfect way out.

But Ian relented at the last minute for the sake of Phil's son Ben and called an ambulance.

It all came to a head with an epic brawl at The Arches, which saw Jack punch Phil, who then fell backwards into the vehicle pit.

Fearing he'd killed him, Jack ran off to the pub to drown his sorrows – where to his horror Phil staggered in and told the whole pub what he'd done before being rushed to hospital.

This time it was newcomer Carl White who wanted Phil dead so that he could take over as Walford's top man.

Whilst pretending to drive Phil to a deal, he deliberately released Phil's seatbelt before crashing the car.

Phil was thrown through the windscreen and airlifted to hospital where he underwent life-saving surgery.

The drama went down on Phil and Sharon's wedding day, where he'd been planning to ditch his bride at the alter for on-off love, Shirley Carter.

But Phil rejected her, sparking a massive row between the trio on the morning of the wedding which culminated in her accidentally shooting him with a gun stolen from Ronnie Mitchell.

Phil was kidnapped by Kathy's cousin Gavin, and when blood was found in his sister's car, it didn't look good.

Then a battered and bloodied Phil suddenly surfaced a week later with several broken ribs and a renewed addiction to booze.

Phil responded by abducting Vincent's daughter Pearl, prompting him to wrap a rope around Phil's neck and attempt to strangle him to death.

Phil's years on the sauce finally caught up with him and he was given just 12 months to live if he didn't quit the grog.

He finally managed to sober up for the six months needed to be offered a liver transplant, but it turned out his son Ben wasn't a match and he instead vowed to die.

Then finally a Christmas miracle saw a liver suddenly become available and he received a transplant on December 25.