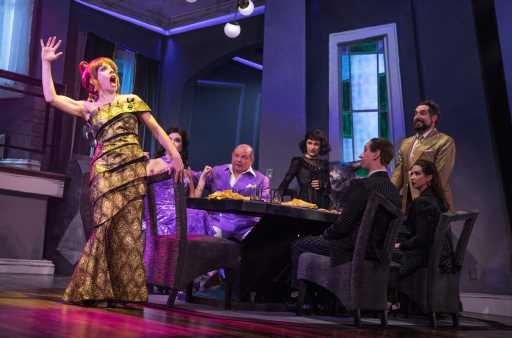 Brooks’ June 17-18 engagement at the Lunt-Fontanne Theatre had a total attendance of 2,967, 99.2% of capacity. The $583K figure marked 112% of potential, with average ticket price hitting $197. (The unscripted show was probably very funny – critics weren’t invited.)

In all, Broadway’s total box office for Week 4 of the 2019-20 season – $35,987,055, to be exact – held steady with the previous week, showing a tiny 4% boost. (Receipts for the five-show Regina Spektor residency at the Lunt-Fontanne will be reported cumulatively next week).

Attendance for the 35 productions was 296,070, just about dead even with last week.

Among the stand-outs for the week:

Also closing this month, as scheduled, are the nonprofit Roundabout Theatre Company productions of All My Sons and Kiss Me, Kate, both giving their final performances June 30. All My Sons, starring Annette Bening and Tracy Letts, played to houses 92% full last week, while Kiss Me, Kate, with Kelli O’Hara in the title role, played at 95% capacity.

The complete roster of sold-out productions (or nearly so, at 98% of capacity or more) for Week 4 was Ain’t Too Proud, Aladdin, Come From Away, Dear Evan Hansen, Frozen, Hadestown, Hamilton, Harry Potter and the Cursed Child, Mean Girls, Mel Brooks, The Book of Mormon, The Lion King, To Kill a Mockingbird, What the Constitution Means To Me and Wicked.

All figures courtesy of the trade group Broadway League.