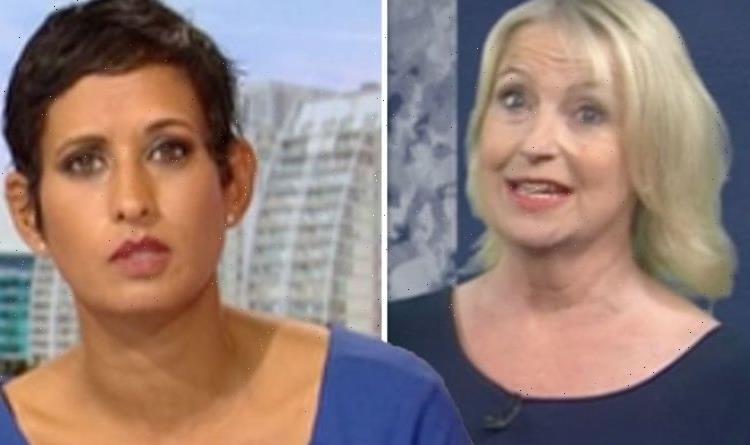 BBC Breakfast: Naga jokes about the pictures behind Carol

Naga Munchetty and Charlie Stayt were joined by weather reporter Carol Kirkwood on Thursday’s BBC Breakfast. However, during one of the metrologist’s reports, Carol was left amused when Naga took a cheeky swipe at Carol’s weather forecasts before the metrologist issued a warning to her co-star over the day’s weather.

Introducing the forecast, Naga said: “We need to hear about what’s going on with the weather this morning.”

Commenting on the pictures sent in by BBC Breakfast viewers, Naga added: “Carol, I do admire the pictures behind you intact, I’m often looking at that instead of you naturally.”

“I don’t blame you I would too,” the metrologist replied with a laugh as she stood in front of an image of the British coast.

“This one is particularly stunning, isn’t it?” Naga asked and she replied: “It is it’s gorgeous.”

After the weather forecast, Naga remarked: “Carol this must be a fun couple of weeks for you because it’s been so varied with the weather.

“Rather than settled you’ve really had to keep us all informed about what’s happening in terms of layers, temperature, rain, etc.”

Carol warned: “But you always have to temper it with the effect it’s going to have on someone else for example we had a tornado in Cheshire yesterday that can cause devastating results.

“There are some unconfirmed reports, I’ll tell you about them a wee bit later on in the programme of tornados elsewhere as well.”

“We don’t often hear about them here,” Naga commented.

“You say that but we have more tornados per square mile than they do in tornado alley there are lots of reasons for that and I’ll tell you when we have more time as well,” the metrologist replied.

Naga and Charlie shared with viewers video footage of the tornado which occurred in Cheshire on Wednesday.

“This was certainly a confirmed report of a tornado but there were some unconfirmed reports as well of one in Ferring which is near Worthing and possibly one in Falmouth.

“But that one is definitely yet to be confirmed because that could be something else altogether.

“Yesterday was very windy and today’s going to be windy again.”

“But you can’t actually forecast exactly where a tornado is going to be,” she continued.

“If you could tornado alley would be packed with tornado chasers.”

“I didn’t know we had more tornados,” Naga remarked as Carol concluded the weather report.