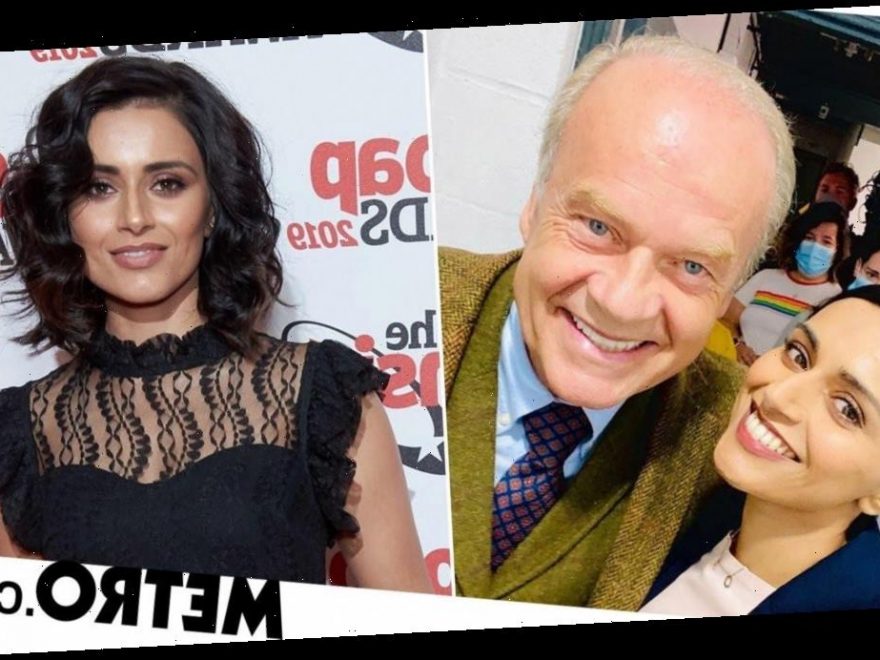 Coronation Street star Bhavna Limbachia is feeling ‘so grateful’ after landing herself a movie role alongside Frasier legend Kelsey Grammer.

The actress, 36, revealed she has been working with US star Kelsey, 65, famed for his roles on sitcoms Cheers and Frasier, for an exciting new movie.

Bhavna confirmed her latest project while sharing a selfie with Kesley to Instagram on Wednesday.

She told fans that she was ‘so grateful’ to be working, as the starts have been busy on set now that production has picked up again throughout the film and TV industry amid the coronavirus pandemic.

‘So grateful to have been working during these uncertain times. The film & TV industry are slowly getting back on their feet, lets hope the same will follow for Theatre.’

An absolute joy working with @mrkelseygrammer ? So grateful to have been working during these uncertain times ?? The film & TV industry are slowly getting back on their feet, lets hope the same will follow for Theatre ?? #covid19 #lockdown #film #tv #theatre

Bhavna and Kelsey are set to appear in new movie Miss Willoughby and the Haunted Bookshop, alongside Caroline Quentin and Game Of Thrones star Tara Fitzgerald.

The movie has been shot all while adhering to coronavirus health guidelines on set, with Kelsey praising production for their efforts.

Variety reports, the actor has said of filming: ‘This has been a terrific experience. Although COVID presented a new set of challenges, we were able to work very effectively through new standards of film production.’

Miss Willoughby follows the story of orphan Elizabeth Willoughby (played by Nathalie Cox) who is raised by retired US marine Robert (Grammer).

She played Rana Habeeb on the ITV soap and fans were left shocked over Rana’s death on the day of her wedding to Kate Connor (played by Faye Brooks), after she was crushed when the factory roof collapsed.

Rana’s exit drew criticism from the LGBTQ+ community, especially after seeing the character’s journey that saw her struggle with her sexuality, before finding acceptance and then falling in love.

Rana was hailed an important and inclusive character, but defending her exit, Bhavna said: ‘My decision to leave and to be killed off was never intended to offend the LGBTQ+ community.

‘It was made in the same way I’ve tried to portray the character throughout the years and that’s with truth and integrity. My decision to leave and to have her killed off was made with the decision on two people being in love and their love being pure – regardless of their age, gender, sexuality, religion.

‘I guess it was a modern day Romeo and Juliet but with a Juliet and Juliet love story.’