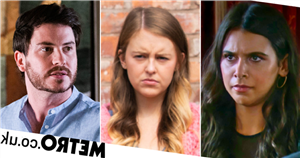 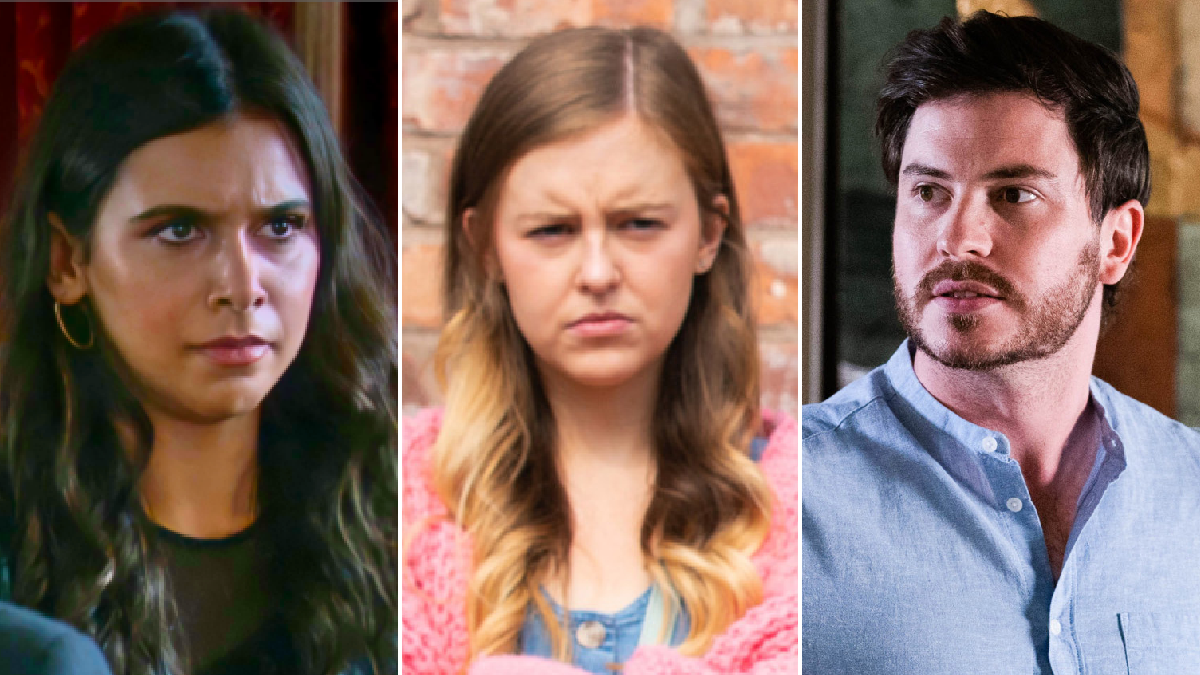 The schemers of soap are in for a pretty tough week, as some face exposure, while others pay a shocking price!

In the case of Coronation Street’s Todd Grimshaw, it’s the latter, as the master manipulator’s sins are at last revealed, resulting in him being arrested!

Meena Jutla could suffer a similar fate over in Emmerdale, as her callous and cold nature sees her toy with Leanna Cavanagh’s ring amid the funeral, and the expensive piece ends up by grieving dad Liam’s shoe!

Is she set to be caught out already?

Jewellery could prove to be Gray Atkins’ downfall also, as Chelsea Fox retrieves an earring belonging to Tina Carter in the back seat of his car!

And as for Cher McQueen? Well, she’s forced to face the music for her crimes, after Mercedes’ latest discovery, in scenes we wouldn’t recommend missing!

EastEnders continues to stream new episodes on BBC iPlayer every Monday, meaning you can catch all of this week’s outings right now!

Coronation Street and Emmerdale, however, will air as normal on ITV, as will Hollyoaks on Channel 4 and E4.

Realising Todd’s ripped him off, Will tells Summer everything, including how Todd tried to split up Billy and Paul. Determined to expose him, the young lad then sends a video to Paul, who subsequently swaps out the laptop at the calendar launch party. Emma introduces the clip and presses play, but it’s not the calendar that goes up on the big screen, but rather it’s a video of Todd telling Will how he successfully split up Billy and Paul! Billy, disgusted, walks off, while Todd is arrested for theft!

Chelsea’s hold on Gray continues to grow, as she persuades him to skive off work. The couple then meet her friend with a van full of dresses, as she needs a new outfit for court. However, Gray soon realises that the dresses are stolen! Chelsea sweets talks her way out of, leading them to have some fun in the back of his car. Chelsea spots an earring, however, and it’s not just any old earring. It’s Tina’s!

Meena caught at last in Emmerdale?

Meena attends Leanna’s funeral, and she covertly fiddles with Leanna’s ring, which is attached to her necklace. The ring, however, falls from her necklace in a shock twist, and it rolls across the floor, stopping beside Liam’s shoe! The killer is horrified, as she fears her murderous nature will be exposed.

Mercedes discovers the truth about Cher in Hollyoaks

In the wake of her shocking discovery, Mercedes is adamant that she did not abduct Eva. Peri, meanwhile, overhears a conversation, and jumps to the wrong conclusion, revealing that it was Cher who set Mercy up! Mercedes, reeling, confronts Cher, armed with this new information, but will Cher admit to what she’s done?

Billy and Summer agree that they did the right thing in reporting Todd to the police. Summer and Aadi spend some time together in Victoria Garden, and when Aadi offers beer a fruit cider, Summer is convinced one bottle won’t upset her blood sugar. However, she soon goes home, feeling unwell. When Todd gets wind of such a thing, he kicks the door in, to find Summer unconscious on the floor!

Mick and Zack come to blows over Nancy in EastEnders

Nancy hurries Zack out of The Vic, after they fall asleep. She subsequently has a run-in with Mick and Frankie who, both up early, want to know who has been sneaking around. Putting two and two together, the pub landlord confronts Zack, demanding that he end things with Nancy. Zack does just that, leaving Nancy heartbroken. After the dust settles, Nancy resolves to go travelling again, leaving Linda fuming, and therefore she confronts Zack, forcing Mick to improvise.

Aaron and Liv come to blows in Emmerdale

Ben is torn over his dad’s emotionally blackmailing texts, and so Aaron urges him to delete them and focus on himself. Ben, in spite of conflicting emotions, agrees. Aaron suggests that Ben move in with him, but Ben declines his offer, explaining that he cannot live with another alcoholic. Aaron is angry at Liv for ruining things, and when he discovers she’s back on the vodka, he blames her for everything! Liv, however, retaliates by claiming that perhaps Ben just isn’t that into him!

Price Slice is robbed in Hollyoaks

Fergus and Warren, desperate to get under enemy Felix’s skin, hit him where it hurts, as they target Martine. They purchase Price Slice, and get the council to issue Martine with a warning regarding the shop’s trading hours. Their plans to manipulate Walter not selling fail, and therefore they decide to rob the safe! Warren breaks in, but afterwards, one resident’s life is left in jeopardy.

One to watch: Wednesday Thursday July 29 at 7pm on E4.

Laura is arrested for child cruelty in Coronation Street

Laura tells journalist Chris that she wants to sell her Kelly’s story. Chris, however, informs Daniel, who relays the information to Imran and Toyah! Enraged, Toyah and Imran tell Laura they’ll report her to social services if she goes to the press, and before long, Laura is taken way by the police on suspicion of child cruelty.

Jean gets a shocking call in EastEnders

Ruby instructs Martin to prioritise his daughter when he remembers she’s got a dentist appointment. Jean, meanwhile, gets wind of this and goes to the hospital with Ruby, leaving Ruby and Martin both feeling grateful. Ruby offers Jean money for helping out, but Jean declines. The duo enjoy some much-needed relaxation as they do face-masks together, but things take a turn when Jean gets a call!