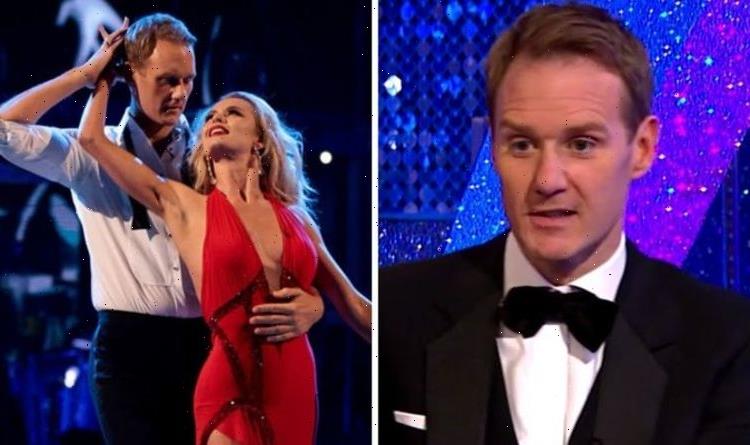 Strictly: Nadiya says she didn't know who Dan Walker was

BBC Breakfast presenter Dan Walker and his professional partner Nadiya Bychkova were the latest couple to be sent home by the Strictly Come Dancing judges. Following his exit from the BBC competition, the 44-year-old journalist made an announcement to his supporters about the impact dancing has had on his body.

Dan, 44, said he was thrilled to have made it into the quarter-final of the BBC competition.

Since leaving the show, Dan has been vocal about his “amazing” experience of learning to dance with pro dancer Nadiya over the past few months.

Just 48 hours after his exit, Dan responded to fans’ messages on Twitter about his time in the competition.

He stunned a lot of supporters after making an admission about his weight loss since signing up for the ballroom dancing show.

Gerwyn directly Tweeted Dan: “Did you lose any weight during your Strictly Experience Dan?”

The father-of-three replied to say that he’d lost a stone “and a bit” which shocked many fans.

Responding to Dan’s admission, Gerwyn said: “Ah okay – a great way to enjoy yourself and lose a few pounds. Thanks for the reply.”

However, Lawrence Gill joked: “We’ll be expecting Dan’s dance workout for Christmas, but please no lycra.”

Stephen Barlow quipped: “Is that body loss or stopping the layers of fake tan?”

Robert Fingleton added: “If you stuff your face over Christmas you could have that all back for the New Year!”

Roger Stephens commented: “Christmas [will] soon sort that one.”

The modest presenter denied that he was naturally a good dancer, and credited Nadiya for her wonderful teaching skills.

Later on in the interview, Dan asked Nadiya: “What do you think is going to happen in the semi-finals and the final?”

Nadiya explained: “I think it’s going to be very interesting because you never know what will happen and it’s about who people want to see in the final.

“I think they are all brilliant and you and I always thought it was going to be Rose and Giovanni [Pernice].”

They will be performing two routines on Saturday night as they hope to do enough to make it to next week’s final.

Ladbrokes think Rhys is the most likely celebrity to miss out on a place in the final, with the TV presenter being 8/15 in the betting for the boot on Sunday night.

Strictly Come Dancing continues Saturday at 6.45pm on BBC One.