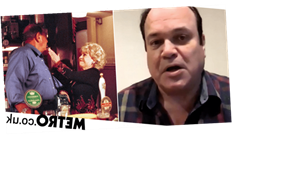 Former EastEnders star Shaun Williamson has reminisced about being part of one of the soap’s most iconic episodes.

Shaun’s character Barry was right in the thick of it, given that he was the son of Pat’s husband Roy.

Speaking to Alex Jones and Gethin Jones on The One Show, Williamson took us all on a little trip down memory lane, and called the episode ‘very special.’

‘Episodes like this didn’t come along every week,’ he admitted. ‘This was a special episode. You had four – I mean it in a nice way – the four big beasts, big actors performing to a brilliantly written script.

‘Don’t forget at the time there were only four channels, so they’d get 20 million people on a Tuesday night. The next day in the street, one out of every three people knew who you were.’

The re-airing of the iconic showdown episode (‘hope you all enjoyed the fireworks! G’night!’) is the last in a run of classic instalments that have been beamed back into our homes over lockdown.

The final pre-lockdown instalment aired June 16, which meant that — for the first time in history — the BBC soap was forced to go off-air.

However, the serial drama cleverly used the break as an opportunity to remind us of why we fell in love with it in the first place, by going back in time and revisiting some of its most iconic moments.

From Pat and Peggy’s classic showdown, to Max and Stacey’s affair reveal, we’ve truly been blessed over the last couple of months, but here are some of the iconic episodes we would like to see aired on the telly again; from Den and Angie’s Christmas Day divorce to Kat Slater’s confession that she was actually Zoe Slater’s mother.