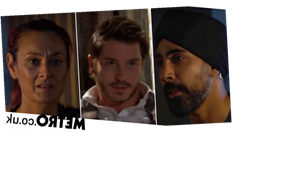 Tina Carter (Luisa Bradshaw-White) has seemingly started to work out that Gray Atkins (Toby-Alexander Smith) is capable of more than he’s letting on in EastEnders.

The young woman has been living under Gray’s roof at No. 1 Albert Square for about a month now.

She’s evidently got under the solicitor’s feet, as he constantly remarks to Shirley (Linda Henry) about the state in which she leaves the house.

Tina hasn’t been pleased about the way in which he constantly complains about her, and her interest has been piqued regarding Shirley’s friendship with the young man.

During Tuesday’s edition (December 15) of the BBC One soap, Tina discovered from Shirley that Gray attempted to murder his own children in the wake of Chantelle’s (Jessica Plummer) death, and she was horrified, branding him a ‘killer’.

In tonight’s episode, she overheard a conversation between Shirley and Gray, in which the former promised the latter she’d keep Tina in check over the festive period.

Tina was horrified, and therefore wasted little time in speaking to Kheerat Panesar (Jaz Deol), who previously issued her with a warning regarding Gray.

Kheerat clarified his previous comments, revealing that Gray is capable of much more than he lets on, and insinuated that he believes he killed Chantelle.

Tina was shocked, but will she discover the truth?

Will she learn that Gray killed Chantelle?

EastEnders continues Friday December 18 at 8:30pm on BBC One.