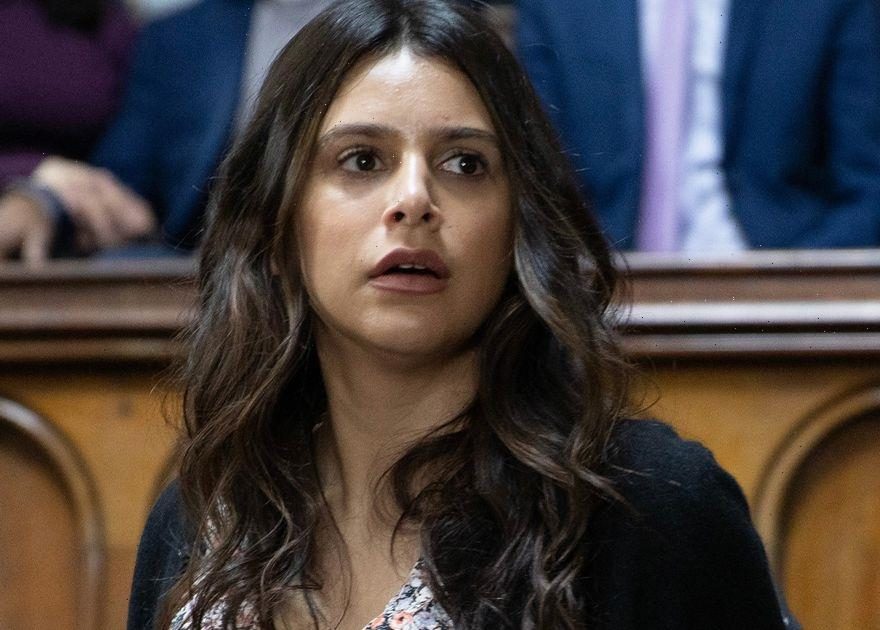 Emmerdale star Paige Sandhu looked worlds away from her murderous character on the ITV soap as she posed up a storm at the 2022 BAFTA TV Awards on Sunday (May 8) at London’s Royal Festival Hall.

The 25-year-old actress, who played the role of Meena Jutla, was joined on the red carpet by co-stars Kevin Mathurin (Charles Anderson) and Fiona Wade (Priya Sharma).

And it’s fair to say the brunette beauty looked positively stunning as she donned a stunning sheer black dress which featured a strapless black bodysuit underneath.

Her glamorous gown also included a daring thigh high split with a ruffled hem in addition to the jewelled black lace that clung to her killer curves.

She paired the stunning dress with a pair of strappy black open-toe heels and styled it with a gorgeous diamond necklace and a simple black clutch bag.

The soap star wore her luscious brunette locks in glamorous Hollywood waves as she brushed her hair to one side allowing her curls to drape over her shoulders.

Paige opted for a full face of glamorous makeup for the star-studded night, as she added a thin band of winged cat eyeliner which she teamed with lashing of black mascara.

She completed the look with a swipe of nude pink lipstick as she beamed to the camera on the red carpet.

Emmerdale took to Twitter to share a carousel of snaps of the ITV soap’s cast at the awards ceremony, where they were nominated for the Soap & Continuing Drama gong.

But unfortunately, Coronation Street stole the win for the coveted category as some of the stars were overwhelmed with joy when the stepped onto the stage to take home the gilded award.”

It comes after the actress shared an emotional goodbye message to the team last month after her character Meena made her dramatic exit from the ITV soap.

Last month, it was revealed that the serial killer had been sentenced to a minimum of 75 years in prison with the judge adding: “You will remain in custody for the rest of your life.”

After the final episode for the star aired, the show shared an emotional clip of Paige saying goodbye to viewers at the end of the show.

She opened the clip, joking: “She’s finally gone down. Who knew?

“I just want to say thank you all for all your support. Thank you to everyone at Emmerdale and ITV and all my beautiful actors and the crew. You’re all amazing.

“You’ve made this experience just the best of my life, and I will treasure these moments forever. And a big thank you, especially to Rebecca Sarker, my on-screen sister, but also a sister in my heart. I love you so much. Bye everyone!”