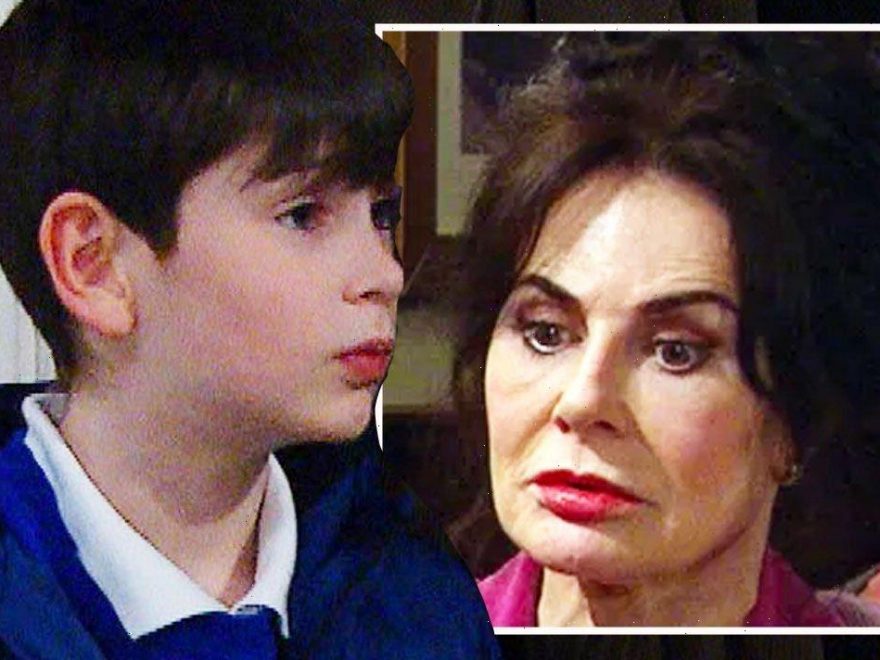 Kyle (played by Huey Quinn) is the son of Emmerdale bad boy Cain Dingle (Jeff Hordley), which means his life is often put in peril, as has been seen in his father’s ongoing feud storyline with Al Chapman (Michael Wildman). The last person the mechanic would ever think could put his son in danger would be Faith Dingle (Sally Dexter), who has been trying to rebuild her relationship with Cain ever since she returned to the ITV soap last year. However, in upcoming scenes, her means of trying to broker peace between her and her son could lead to huge repercussions for her grandson.

The drama begins next week as Faith is still on a mission to make her son see she isn’t the wretched witch he makes her out to be.

Since his days as a child, he has never seen eye to eye with his mother as he thinks she could have done more to protect him from his sister, Chas Dingle’s (Lucy Pargeter) abusive father, Shadrach Dingle (Andy Devine).

Wanting to help her mother and her brother, Chas suggests to Faith she uses Kyle as a way of getting through to bad boy Cain.

She also adds how gardening could be a way in as the mechanic has often gone to the allotment to help his friend Liam Cavanagh (Johnny McPherson) tend to the vegetables when life gets too much in the village.

Trying her luck, she manages to convince her son to take Kyle to the allotment and she suggests he tags along as well as part of a family day out.

It seems she will also rope in Dan Spencer (Liam Fox) to help out with the work as Faith is not one to get her hands dirty.

He ends up doing most of the work but when Cain arrives, he is touched by his mother making an effort and softens towards her.

Cain agrees to let Kyle come down and goes to fetch him but it has been hinted Faith will end up undoing all her hard work to get her son on her side.

This could include not watching the youngster carefully when he finally arrives at the allotment and gets stuck in with the upkeep of the vegetables.

Disaster could strike as Kyle could end up ingesting some pesticide meant to be sprayed on the shrubs to keep the insect and mites at bay.

Keep our youngsters coming through

It won’t be until the young schoolboy passes out at the allotment alarm bells will start ringing that Faith has made a huge mistake.

As the youngster is rushed to the hospital, she could discover it was the pesticide he ingested but she knows if she confesses to not watching Kyle, Cain will never forgive her.

Deciding the medical professionals will be able to figure it out themselves, she decides to harbour the truth about the poison.

Ultimately, this would delay the urgent treatment the youngster would need to make him better and this could lead to devastating consequences.

Although the doctors would be able to get his condition under control, they would begin to realise he isn’t responding as they would have liked.

Performing a brain scan, they would discover he has immense brain damage and this would allow them to come to the conclusion he must have been poisoned.

As Cain begins to put the pieces of the jigsaw together, he would realise there was a bottle of pesticide at the allotment.

He would be furious with his mother as to why she let Kyle ingest it, to which she could admit her attention was elsewhere.

If she thought there was any hope of getting back in Cain’s good books, she will soon realise she will never make it up to her son.

With Kyle’s life changed forever, his father and mother, Amy Wyatt (Natalie Ann Jamieson), will have to begin thinking about what this means for their son’s future.

In an interview with Express.co.uk and other media, the soap boss said: “I think it’s really important for the show that we have stories aimed at everybody.

“What makes soaps different from a lot of dramas is our reach, which is teens right up to 90 plus. We’ve got a lot of viewers to keep happy.

“You’re going to be seeing them much more prominent in the stories because they deal with topics that affect their generation and we see how they handle things.

“It’s really important that we keep our youngsters coming through because they are our next generation,” she continued.

Kyle has been a more regular character on Emmerdale in recent months, with his relationship with Cain making viewers fall in love with him.

As he’s got older, the schoolboy has developed his own personality and he has shown he has inherited his father’s softer side.

Cain would be absolutely heartbroken to see his son in such a vulnerable position as he knows there is nothing he could do.

Although the doctors will try to bring down the swelling in his brain, life will never be the same for Kyle again.

Will Cain decide he needs to get revenge on his mother or will he just cut her out of his life forever?