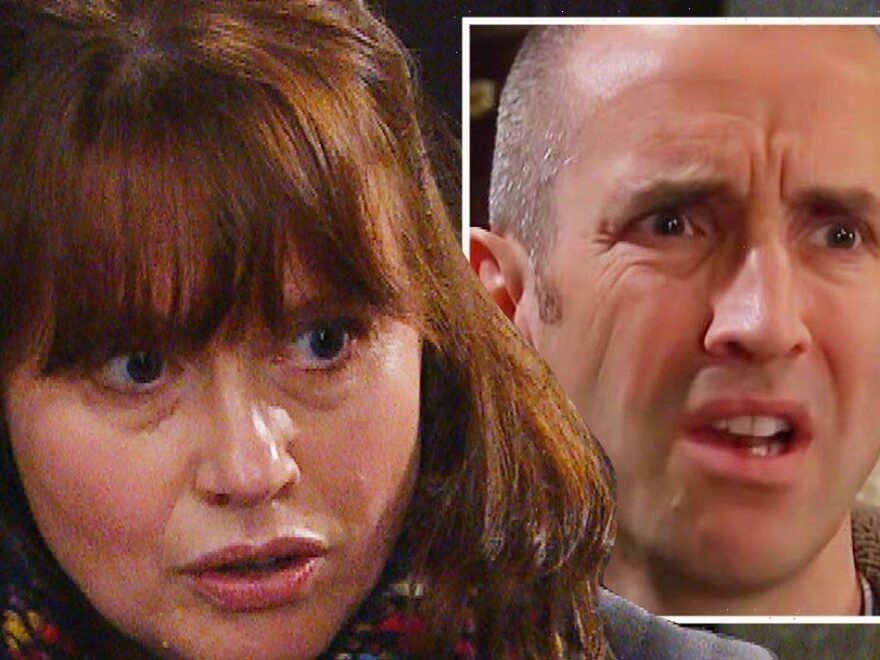 Lydia (played by Karen Blick) is currently unaware her husband, Sam Dingle (James Hooton), has bought a caravan from the scrapyard which he is hoping to renovate instead of buying a brand new one on Emmerdale. However, his wife has got her sights set on a modern, plush vehicle with all the bells and whistles, leaving him feeling frustrated his won’t be anywhere near what she expects. In upcoming scenes on the ITV soap, the caravan could be the thing which tears them apart for good.

The drama continues in next week’s episodes as Lydia is still none the wiser about her husband’s plans and she plonks a brochure of expensive caravans in front of him.

With money extremely tight, he knows he is never going to be able to afford what his wife dreams of, leaving him to make a big decision.

As the caravan he bought is nothing like the ones in the brochure, he tells Vinny Dingle (Bradley Johnson) he no longer needs it.

However, it’s not long before she is told exactly what Sam had planned and is devastated to think she made him rethink his plans.

Wanting to put the caravan to good use if they cannot afford a new one, Lydia enlists Vinny’s help to continue the renovations.

However, this is where the trouble begins as Lydia could make some changes which effect the mechanical properties of the vehicle.

As she shares her work with Sam, she could surprise him further by telling him they are going to go away in the next few weeks.

Lydia will explain she’s cleared it with Kim Tate (Claire King) for the pair to enjoy some time off together.

Wanting him to get used to the caravan, she could encourage him to take it on the road and give it a spin down the country lanes.

Unfortunately, having messed with the mechanical properties of the caravan, Lydia could have accidentally done something to the breaks.

Sam and Lydia will also have a big story

When Sam decides to go out on the road, he could go around a corner but realise the breaks are not working and he is going to crash.

This tragedy could end up killing the beloved character as the caravan goes hurtling into a brick wall.

As the Dingles mourn the loss of one of their own, an investigation into the crash could reveal the breaks were not fit to use.

Realising she messed with the breaks before her husband went out for a drive, it would dawn on Lydia she is responsible for his death.

Will the beloved villager ever be able to forgive herself for what she did or will she hands herself in to the police?

If she is questioned about the crash, Lydia could end up making her own exit from the show as she is sent to prison for killing her husband.

She could end up facing the consequences of her mistake as she should have alerted someone to messing around with the brakes.

Vinny would be shocked by what happened, given he worked on the caravan with Lydia.

He was sure it was absolutely fine and fit to drive but will he also feel some sense of guilt over Sam’s untimely death?

Producer for the show, Laura Shaw, preciously teased some big drama for the couple this summer as they face a huge challenge.

The soap boss told Express.co.uk and other media: “Sam and Lydia will also have a big story that sees them having to pull together.

“I think the stories running through the summer are very much about strengthening some of our couples and seeing them fight for what they love as well as maybe pushing one or two others to breaking point.”

Sam’s death would certainly take the couple to breaking point as their relationship would be over for good.

Speaking about the prospect of wanting to stay on the show, the actor who plays Sam, James, has said he would want to continue playing the Dingle man forever.

James said: “I have a family and two children to bring up. My job means stability and paying the mortgage.”

“I’m having a renaissance period with the show and enjoying it more now than ever,” the actor said in an interview with The Mirror.

“I would love to see the Dingle clan still going in 25 years. They will have taken over the village by then, there are so many of them. They’ll be running amok.”

But will writers make a big u-turn and get rid of the character for good by killing him off?