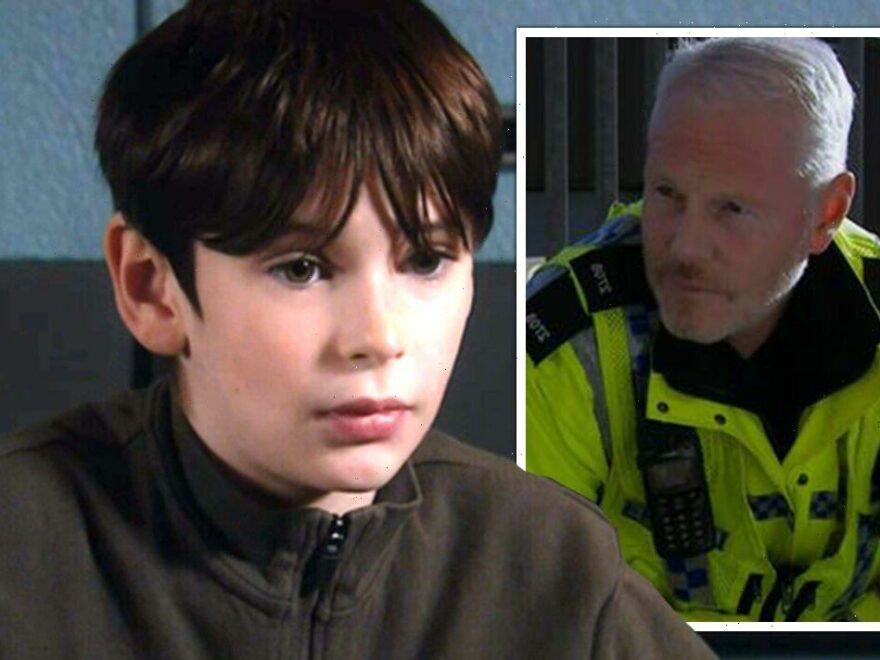 Emmerdale saw Kyle Winchester (played by Huey Quinn) confess that he killed Al Chapman (Michael Wildman) in the latest episode. The youngster took himself to the police station with a plastic bag, telling police he was responsible for Al’s murder. But fans wondered whether the evidence would be enough to release his dad Cain Dingle (Jeff Hordley) from prison.

After being persuaded by his uncle Caleb (William Ash) to go to the police, Kyle felt a sense of relief as he had struggled to keep his actions a secret.

Not wanting his dad to suffer anymore, he told officers the plastic bag contained a jumper he had been wearing on the day of the shooting.

The child explained how the item of clothing had Al’s blood on it, but viewers spotted a few errors.

Taking to Twitter, they said the jumper only proves Kyle was there when Al was killed, but not that Kyle actually killed him.

There was also the question of why nobody thought to destroy the evidence in the first place.

Lee Cotton added: “So the criminal geniuses that are Cain, Moira and Amy didn’t think to destroy the clothes Kyle was wearing when he saw off Al? #Emmerdale.”

Ben Powell shared: “Why did no one think of moving the evidence for Kyle??? I mean enough people knew the village’s worst kept secret #emmerdale.”

Lottie Mills said: “Oh my god no Kyle… how did he get blood on the jumper and how did he still have it?! Surely they’d have got rid of that?! Not like you’d keep it! #emmerdale”

Despite Kyle’s confession, many viewers believe he will be let off without any repercussions.

Due to his age, he is too young to be sent to prison, which fans have picked up on.

Ryan Glendenning said: “Not a lot could happen to Kyle anyway at this time post confession.

“He’s too young to go to prison unless he goes to young offenders. Or gets charged when he’s over 18. #Emmerdale.”

Simon Ramsay shared: “Kyle is being so honest. I’m relieved that he’s confessing!

“He won’t go to jail obviously, bc of his age. Cain was silly taking the rap for him, even it’s understandable. #Emmerdale” [Sic]

Now that Kyle has confessed, viewers are concerned about the game Caleb is playing.

GrianneDoherty33 asked: “Poor Kyle, what exactly did Caleb say to him?

“If he actually told the truth, his Dad would immediately get out, really?

“Also, he’s literally been blaming Cain for supposedly ruining his life this whole time. Wouldn’t he want him locked up?”

Viewers already think they have worked out Caleb’s true identity, believing he is in fact connected to Chloe (Jessie Elland) or her adopted family.

They believe he could be Chloe’s adopted father, with the truth yet to be revealed.

Emmerdale airs on ITV at 7.30pm