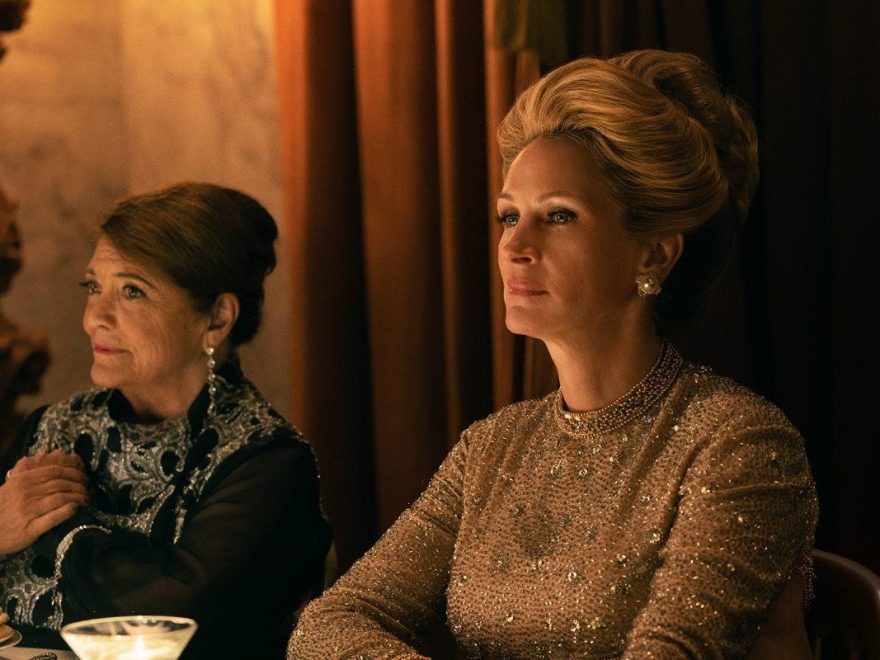 Based on a true story, the Starz series Gaslit features Julia Roberts in the role of Arkansian socialite Martha Mitchell. Mitchell became well known for her outspoken demeanor. Known as the “Mouth of the South,” Mitchell made gossip a sport, and she often used subtle tricks to release information to journalists about prominent political figures.

‘Gaslit’ episode ‘Will’ sets the stage for the leadup to Watergate

We first meet Martha Mitchell in Gaslit when she appears on a game show, and the host introduces her as the “Mouth of the South.” John Dean (Dan Stevens) is wrapping up a one-night stand with a girl when the game show comes on TV. John’s date learns he works for President Richard Nixon’s Attorney General, John Mitchell (a completely unrecognizable Sean Penn).

Later that day, Mitchell calls John into his office, along with another assistant named Jeb Magruder (Hamish Linklater). Together Mitchell and Magruder explain to John that they want him to gather intel on the Democratic party that would help Nixon win the re-election. At first, John turns down the offer, fearing the consequences, but Mitchell slyly mentions that Nixon requested John personally. John reconsiders and tells the men to contact G. Gordon Liddy (Shea Whigham).

Mitchell comes home to find Martha giving yet another interview, which Mitchell has tried to prohibit her from doing. This time it’s “just the Ladies Home Journal,” but it doesn’t matter. Mitchell kicks Winnie, the reporter, out of their home.

John sets up a meeting with Liddy and Mitchell so that Liddy can present his plan for gathering information about the Democratic party. However, the project includes kidnapping and prostitution, which immediately gets Liddy branded as a crackpot.

Later in the premiere episode of Gaslit, Martha and her husband attend a fundraiser for President Nixon. Martha notices she’s seated at a table at the back and believes that it’s Pat Nixon’s doing. The two women aren’t fond of one another. As a group of singers takes the stage to perform, one of the singers pulls out a cloth with the words “Stop the killing” written across the front. The woman criticizes President Nixon’s handling of the Vietnam War, something Martha previously spoke out against in interviews. Security officers immediately escort the woman from the venue.

Later that night, after getting home from the fundraiser, Martha calls Winnie in the middle of the night. Martha tells her about the protester but then casually mentions a brewing feud between Nixon and Henry Kissinger.

‘My momma slaps me harder than that’

John Mitchell never comes across as particularly likable throughout Gaslit Episode 1 “Will.” At one point, Mitchell learns of Martha leaking information about the Kissinger feud to the press during a party at their house. The couple gets into a physical altercation. Mitchell snaps and slaps Martha across the fact. She gasps as he says they both need to cool off before quickly hitting him back even harder. Martha menacingly lowers her voice as she says, “My momma slaps me harder than that.”

At this party, John Dean learns Nixon never personally requested him. Instead, it was Mitchell’s way of manipulating him into accepting the assignment. He types up his letter of resignation and goes to leave it on Mitchell’s desk, where he finds a memo to Mitchell about a missed call. Now, Nixon really is requesting John to work on the assignment. John decides to hold onto that resignation letter for now.

Despite their fight the night before, Mitchell asks Martha if she and their daughter, Marty, would like to travel to California. They happily accept, and Martha stays blissfully unaware of the events that are about to unfold.