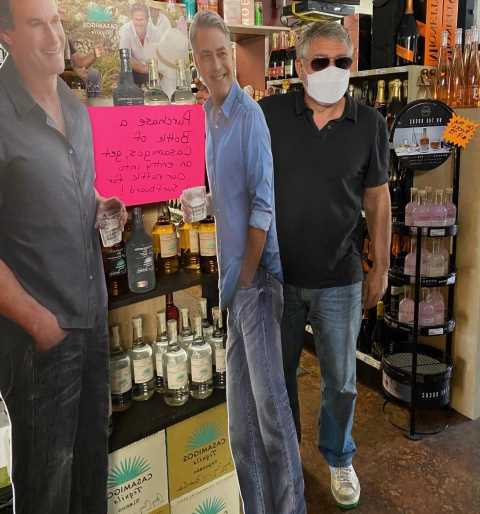 George Clooney knows a Kodak moment when he sees one!

The "Midnight Sky" actor and director headed to Marcorelle's Fine Wine and Beer in Ipswich, Massachusetts, a coastal town located about 45 minutes north of Boston, on Friday morning to film a few quick scenes for his new film The Tender Bar. But when he arrived, he discovered a cardboard cutout of himself from a Casamigos tequila advertisement.

"He came in, and we have two big cutouts in the store of him, and he actually took a photo with his cutout," Leah Smith, who manages her family's store, tells PEOPLE. "He was very nice. He was an incredibly nice guy. Everyone had only good words to say about him."

Dressed in a black polo shirt, jeans, white sneakers and a mask, Clooney filmed two quick takes in between chatting with Smith and her father, who owns the store. Ben Affleck, who stars in The Tender Bar was also present for the filming, but didn't come inside the store.

Clooney, 59, has been making locals smile in the Boston area while filming in recent weeks. On Tuesday, he snapped a selfie with Ashby Police Officer Brian Vautour.

"Who is that masked man? That's right, the one and only, Ashby PD's own, Officer Brian Vautour. Also pictured is some guy named George something or other… Only kidding Mr. Clooney," the police department joked on social media.

During some downtime between takes on Wednesday, the cast and crew headed to Bemis Park in Watertown to film. While Affleck fielded grounders in knee-high tube socks, an orange baseball shirt emblazoned with "The Dickens," which is the name of the bar in the film, Clooney stepped up to the plate to take a few swings while the cameras were off.

Dressed in a gray sweatshirt, jeans, and white sneakers, the father of two even hit a few balls to the outfield.

RELATED VIDEO: Mae Whitman Reflects on 25th Anniversary of One Fine Day and Friendship with George Clooney: 'He Took Me Under His Wing'

Affleck was spotted filming in Fitchburg sporting 1970s attire on Thursday morning. Wearing flared jeans and blown-out hair, the Cambridge native chatted with Clooney on set in the middle of the street, which was dotted with '70s-era cars, while onlookers gazed at the duo.

They were also spotted filming at the Wakefield Bowladrome in Wakefield, where Clooney happily chatted with fans outside.

Based on the popular book of the same name by J.R. Moehringer, The Tender Bar is about a boy growing up on Long Island seeks out father figures among the patrons at his uncle's bar. Additionally, the film features The Undoing star Lily Rabe and actor Tye Sheridan.