Earlier this week, famous chef James Martin created mayhem in the This Morning kitchen when he tried to rustle up a dish for hosts Holly Willoughby and Phillip Schofield. James became flustered when the blunder he used created a mess while struggling with the directors in his ear telling him how much time he had to go. Watching the moment on-screen, the Gogglebox stars voiced their opinion on the moment, with some taking aim at Phillip for being “rude”.

Throughout the This Morning moment, James could be seen getting progressively irate as incident after incident unfolded in the studio kitchen.

The Gogglebox stars saw the chaos start when James lost control of a blender he used in the kitchen, bringing laughter from Holly and Phillip.

As the pressure piled on, Phillip and Holly weren’t much help to the TV chef – and were less than sympathetic.

It didn’t take long for James to kick off, refusing to speak to Phillip by the time his segment in the kitchen had come to an end. 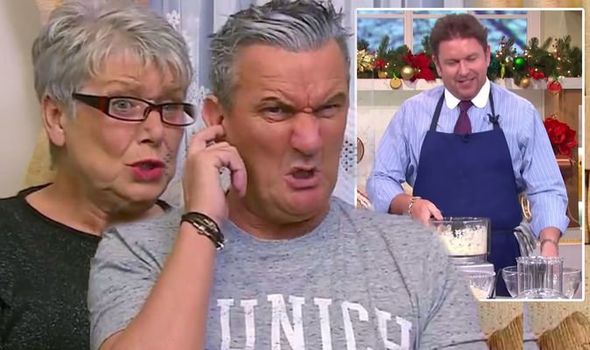 We will use your email address only for sending you newsletters. Please see our Privacy Notice for details of your data protection rights. Gogglebox viewers ‘switch-off’ over ‘vilest thing ever witnessed’

However, Phillip’s reaction was branded “rude” by a few of the show’s stars, while others commented on how the This Morning pair’s laughter wouldn’t help the situation.

And when Phillip claimed James’ dish looked like a “skid mark”, Mary said: “No, Phil. That was rude.”

“Don’t worry, Phillip and Holly have got your back,” sarcastically added Pete.