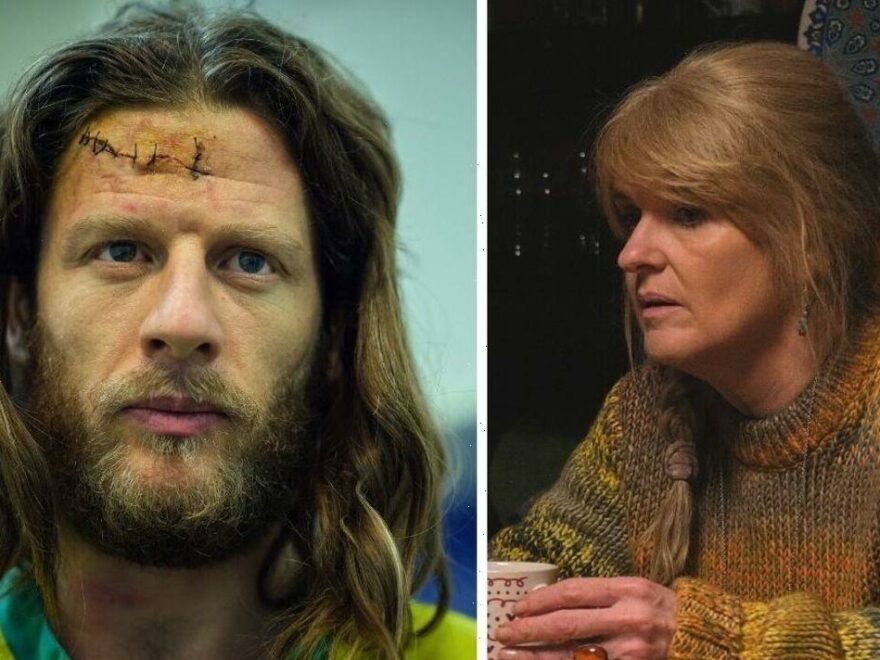 The opening episode of the new series of Happy Valley, which last aired on-screen in 2016, saw Catherine Cawood (played by Sarah Lancashire) discovering the remains of a gangland murder victim. Tommy Lee Royce, (James Norton) who is her late daughter’s rapist and father of her grandchild Ryan Cawood (Rhys Connah) is the main suspect for the crime, which happened years before he was imprisoned. However, it turns out Catherine had more personal matters to think about when it emerged Ryan had been secretly visiting Tommy in prison with the help of an unknown man and woman. Fans of the BBC drama have predicted Catherine’s sister Clare Cartwright (Siobhan Finneran) might be behind the visits, meaning Catherine is being betrayed by the person closest to her.

The long wait for the new instalments of the gripping drama is finally over, and the popular BBC programme has returned for one last series.

Ryan is noticeably older and, at 16, is clearly more able to keep secrets from his gran than he used to be.

While Catherine started off the episode making the grim discovery and counting down the days to her upcoming retirement, she was shocked when she was informed Ryan may have been visiting evil murderer Tommy.

Due to the hearsay nature of the source, Catherine initially refused to confront Ryan until she had more evidence.

“It’s Chinese whispers, it’s b*****s.” Catherine also questioned how the teenager would have been able to arrange getting from the Yorkshire village all the way to Gravesend Prison in secret, but was shocked to find out Tommy had been moved up north.

After realising Tommy had been transferred to Sheffield, she began to worry.

However, she still refused to entertain the rumours until Mike had found more evidence.

As the story unfolded, it became clear that the criminal goings on in the troubled village were far from over.

Before the episode concluded, Mike came to see Catherine to deliver some bad news.

“Got some intel for you from the prison in Sheffield,” he remarked, adding: “You’re not going to like it.”

Viewers will have to wait to find out what Mike has discovered though, as the episode drew to a close on the cliffhanger.

From his response, it seems safe to assume Ryan has indeed been visiting Tommy – but who has assisted him?

Some fans have taken to social media to predict the culprit could be Catherine’s loving sister, Clare.

@itsamy_xo added: “Pls don’t tell me the man and the woman are Claire and Neil #HappyValley.” (sic)

@helenthevet added: “#HappyValley did not disappoint, I’m hoping it’s not Clare and Neil taking Ryan to visit the prison…..cliffhangers.”

Could it be Catherine’s sister going against her wishes and allowing Ryan to get to know his evil father?

If so, it would be the ultimate betrayal for Catherine.

Happy Valley continues on Sunday at 9pm on BBC One.