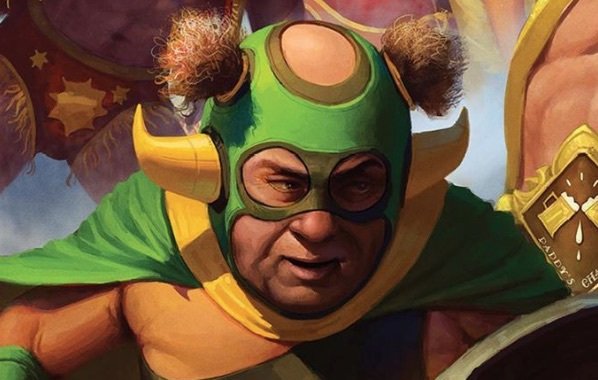 Who is that masked man, you ask? Apparently you don’t know your It’s Always Sunny In Philadelphia. See the full Season 14 poster below.

The new poster for the upcoming season – released by the FXX series today and later shared by creator and co-star Rob McElhenney on Instagram – depicts the gang in full-on superhero-like pro-wrestler mode (that’s Danny DeVito’s Frank in the detail above). The official series post included the message: “14th season. Still fighting dirty. Sunny’s jumping off the top rope 9/25 on FXX.”

“Season 14 poster,” McElhenney wrote on his Instagram. “And yes I’m posting it from the Guinness Brewery in Dublin because life is wonderful.”

McElhenney offered no clues about what the poster could mean – if anything – for the upcoming season, which premieres Wednesday, Sept. 25 on FXX. Last season’s poster, with its summer camp horror vibe, hinted that Glenn Howerton’s Dennis would indeed be returning to the series, a question long since answered.

The new poster depicts Dennis as the golden god he believes he is, while Kaitlin Olson’s Dee wears a form-fitting Wonder Woman-esque get-up, Charlie Day’s Charlie is mohawked, DeVito’s Frank has horns (naturally), with his hair poking out from his cowl and a warthog for a belt buckle, and McElhenney’s now openly gay Mac looking buffer than ever in a Speedo-style garment (is that a sheriff’s badge on the front?) and a red cap marked with the symbol for male.

McElhenney’s sharing of the poster comes just days after he posted a teaser shot from an upcoming episode of an apartment-for-rent flyer advertising an open spot in the dump called home by “Gruesome Twosome” Charlie and Frank.

Check them out below. And leave a comment if you see any clues in the poster.