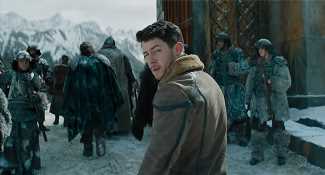 Dwayne Johnson and Kevin Hart are headed back to the jungle in the ‘Jumanji’ sequel, ‘The Next Level’ this December. And, they’re joined by newcomers, Awkwafina, Danny DeVito and Danny Glover for a hilarious adventure more wild than the last!

Here we go again! The official first look at Jumanji: The Next Level, a sequel to the 2017 hit Jumanji: Welcome to the Jungle, is here. This time around, the original cast — Dwayne Johnson, Kevin Hart, Nick Jonas, Karen Gillan and Jack Black — is joined by a slew of fresh faces including, Awkwafina, Danny DeVito and Danny Glover. While the group returns to the jungle, this adventure inside the video game looks completely different than the last.

The sequel, which hits theaters on December 13, takes grandfathers (Danny DeVito and Danny Glover) inside the world of Jumanji for the ultimate role-switching journey. However, they’re thrust into the game as Dwayne and Kevin’s avatars, which makes for a whole new comical ride. The trailer shows the moment Dwayne and Kevin (aka, DeVito and Glover) arrive into the game, and they’re clueless as to what is about to go down. “I have one important question,” Dwayne’s character says. “Who is Jumanji?”

In the first look at Jumanji: The Next Level, the players will have to brave different landscapes and unknown areas including deserts, snow-covered mountains and more in order to escape the unpredictable game. Although Nick and Awkwafina make smaller cameos in the first trailer, the moments they’re featured in are anything but. Take a look, above!

Jake Kasdan returned to direct the Sony Pictures action movie, which was written by Jeff Pinker and Scott Rosenberg. Dwayne is also a producer on the film. Jumanji: The Next Level hits theaters on December 13.