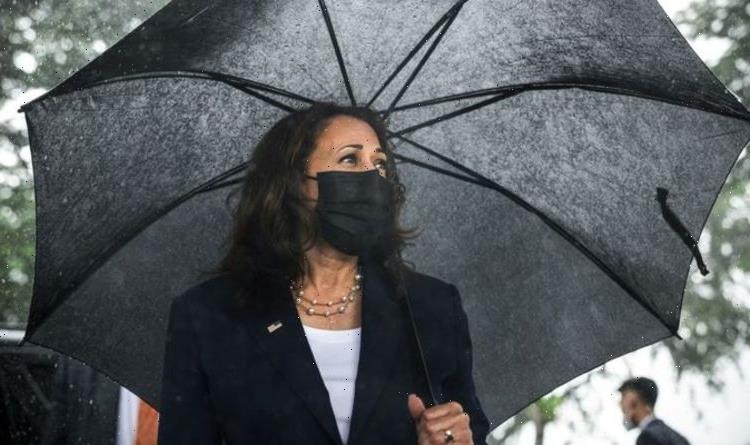 Republican Congressman Madison Cawthorn has sent a letter to Vice President Kamala Harris urging her to invoke the 25th Amendment to remove Joe Biden from office Thursday. It came after the deadly withdrawal of US troops from Afghanistan led to furious backlash towards the US President.

In the letter, he wrote: “Our nation is at a crisis point.”

The White House did not immediately respond.

This includes 10 Marines, two Army soldiers, and a Navy corpsman.

Mr Cawthorn also told Fox News Thursday evening that Joe Biden is not “mentally fit to serve as president of the US”.

He said: “Joe Biden’s physical inability to lead is not a political talking point – it’s a demonstrable fact.

“I cannot sit idly by and watch the nation that I love spiral into death and devastation because our leader cannot discharge his duties.

“There is no time to wait, the time for action is now.”

Reuters/Ipsos polling has shown President Biden is shedding support from independents, a crucial voting bloc that helped Democrats win the White House and Congress last year, as a resurgence of COVID-19 cases slows the country’s return to normal from the pandemic.

The drop in support comes at a precarious time for the first-year president, whose administration has been under fire for its handling of the pullout of US forces from Afghanistan.

At home, the COVID-19 pandemic has surged anew, especially in populous Republican-led states such as Florida and Texas that have resisted new restrictions to hamper the spread of the Delta variant of the virus.

Despite Mr Biden’s push for vaccinations, 39 percent of US residents have not had even their first shot, according to data from the US Centers for Disease Control and Prevention.

The decline in President Biden’s popularity is more likely to be a sign of exhaustion with the pandemic than it is about their support for his ideas, said Robert Blendon, a health policy and public opinion expert at the Harvard School of Public Health.

Josh Schwerin, a Democratic strategist who worked for Democratic super PAC Priorities USA, said Biden and Democrats must continue to draw a contrast with their approach and that of Republicans such as Florida Governor Ron DeSantis, who has pushed back against mask and vaccine mandates.

“Thousands of Americans are dying as a result,” he said.