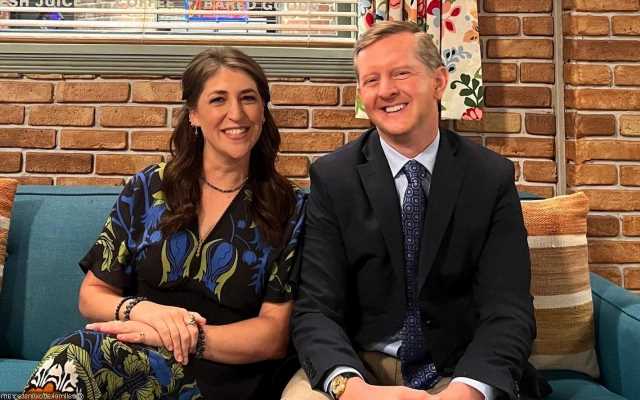 The former winner of the game show-turned-author is tapped to make an appearance as himself in season three of the ‘Big Bang Theory’ alum’s new comedy series.

AceShowbiz –Ken Jennings will join his “Jeopardy!” co-host Mayim Bialik on her sitcom, “Call Me Kat“. The 48-year-old host and author is set to make an appearance in season three of 46-year-old Mayim’s show.

According to TV Insider, Jennings will play himself in an episode where Mayim’s Kat sits next to him on an airplane and fills him in on her adventures in Paris. Meanwhile, Mayim previously revealed was determined to “help” on “Jeopardy!” however she could after Mike Richards stepped down.

The former “The Big Bang Theory” actress was originally hired to host primetime specials and spin-off series of the long-running quiz show, but following the departure of the show’s other new presenter, she was asked to fill in as daytime presenter, and was delighted to do whatever she could for her new “family.”

And Mayim insisted she doesn’t “wish ill” on Mike, who was also fired as executive producer on the show after past comments he’d made resurfaced. She wrote in an essay for Newsweek, “I think everyone who works with me will say that, as a person who has been acting since I was a kid, I go where I’m pointed and I do the job I’m told to do. I do what’s in front of me. I don’t really follow the news aspect of my industry too much. That’s how I approached what was going on.”

“Of course I was in touch with Mike as he was my boss at that time, and I don’t wish ill on him, or anyone,” she continued. “But the complexity of these situations is not something that can be summed up easily. My first response, when all of this went down, was to say to the Jeopardy! team, ‘How can I help?’ Because I am part of this family.” Long-running “Jeopardy!” host Alex Trebek passed away in November 2020 after battling cancer.