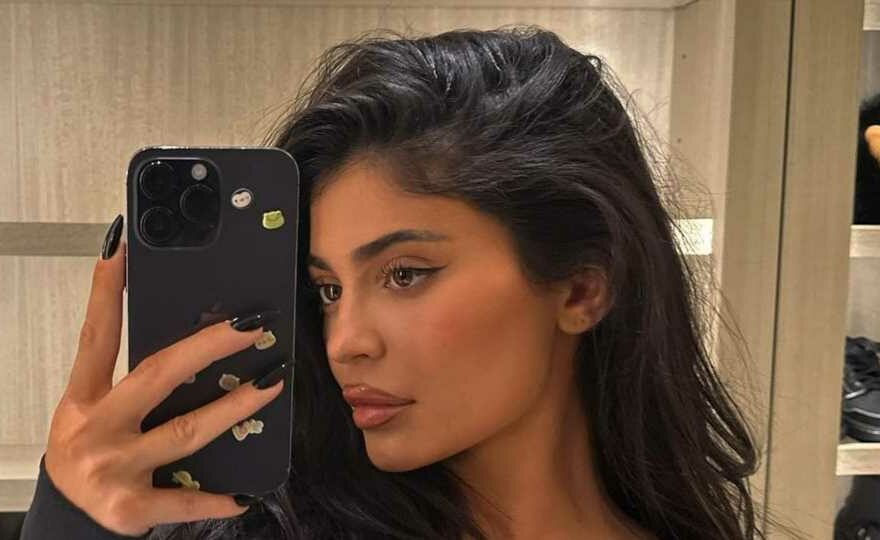 KYLIE Jenner has left fans worried for her well-being after she shared sexy bikini snaps which featured an odd detail that got fans buzzing.

Some are worried that she may be dealing with a health issue after taking notice of what appeared to be a "painful looking" ailment in new photos. 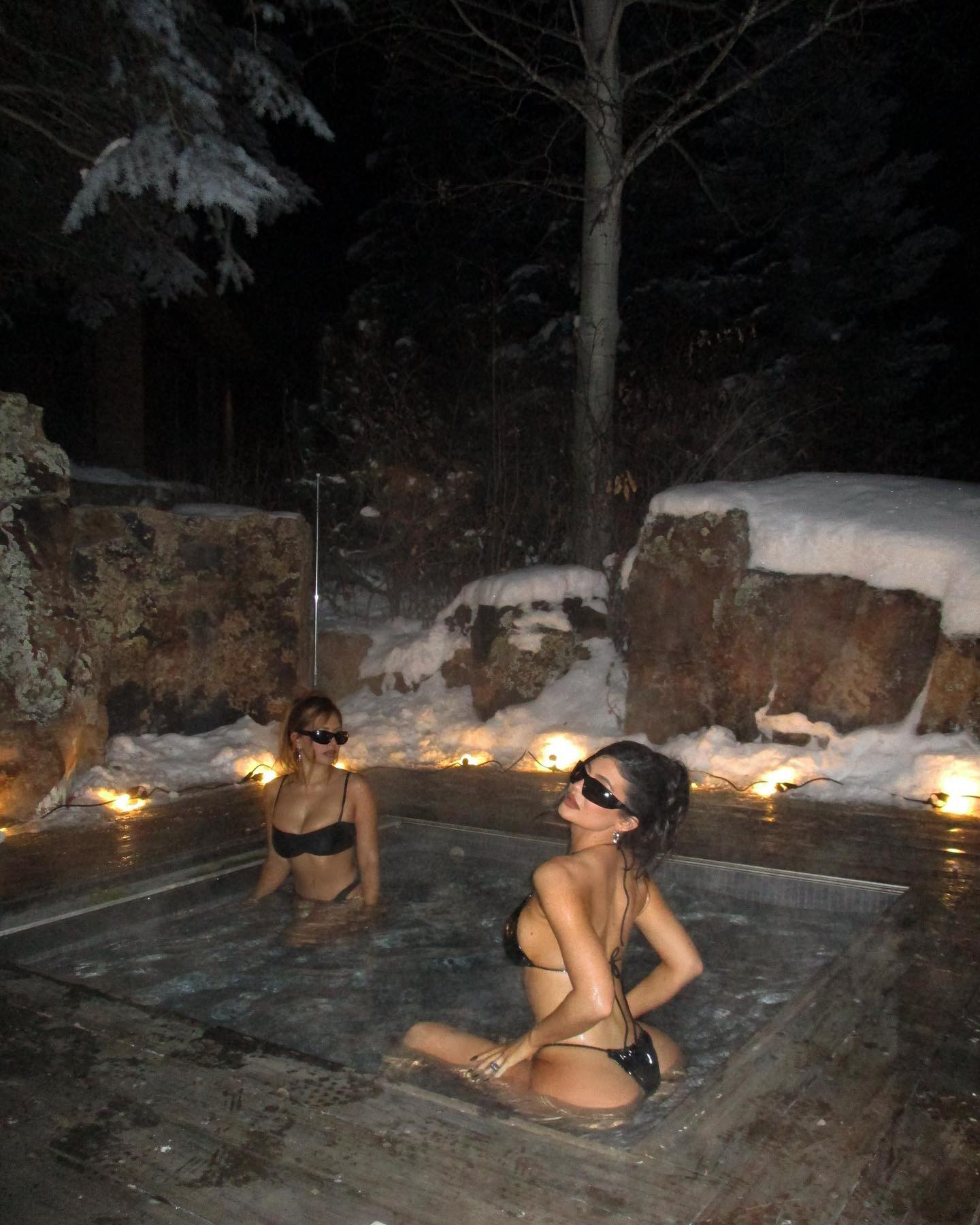 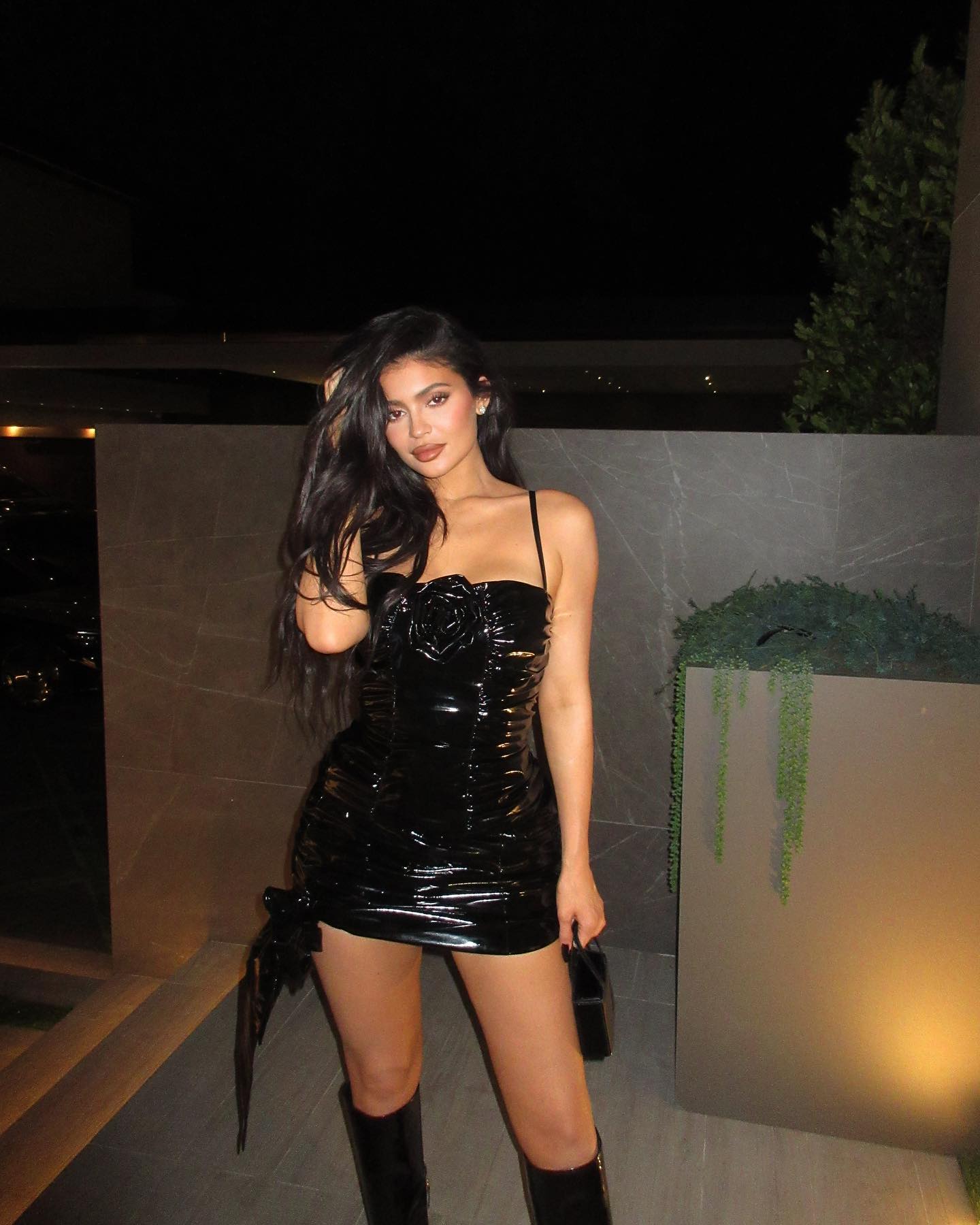 After Kylie, 25, shared a series of snaps posing in a tiny black bikini in a hot tub with a friend, fans took to Reddit to express concern.

Several worried that the makeup mogul may be in pain, taking note of her unusual posture.

The original poster wrote; "If she keeps doing this pelvic tilt she's gonna screw up her back right?"

Someone else agreed, writing: "Yeah, she is for sure. I know because I'm currently trying to put it back in place and my sciatica is insane."

A second fan joked: "The new face of scoliosis."

A third wrote: "My lower back hurts just looking at this."

Someone else chimed in: "Yes, anterior or posterior pelvic tilt is bad for the entire body over time, especially if you walk or stand that way."

Another critic commented: It's okay. The doctors will just make her a new spine."

Her poses aren't all that got fans' attention recently.

Kylie recently came under fire after a series of snaps she shared wearing a look fans weren't fond of.

the mom of two posts in baggy pants and a chic winter coat with a shaggy fur-like trim.

She accessorized with a matching scarf, a pair of dark sunglasses, and a black headband, and wore her brunette hair down straight as she pulled a sultry pout for the camera.

A fan shared a snap of Kylie rocking the same look while strolling with her sister Kendall Jenner on a Kardashian-themed message board, with several others commenting on the thread.

One person asked: "How many poodles, yaks, or faux fur rugs died to make Kylie's coat?"

"Is that real fur," someone else pondered, while a different Reddit user said: "Tell me that’s not animal fur."

Another commented: "I think she looks bland and washed out here… her whole vibe is depressing me," while someone else added: "It looks like Halloween City cheap fabric ghoul costume. Or the first half of one of those fringe edge felt blankets you make in Girl Scouts."

Referring to the small black and white handbag she was carrying, which featured a long tassle on one side, a different person joked: "Why did I think Kylie was holding a walker."

Someone else noted: "it took me forever to see the bag Kylie was holding. I really thought she was out carrying a riding crop."

However, others loved the look as one said: "I love the headband on Kylie. I actually dig their winter looks."

Someone else wrote: "I love Kylie’s over the top looks," while a third added: "Actually love Kylie’s headband and sunglasses… but that white thing looks cheap and tacky (though I know it’s probably not cheap). Kendall’s outfit is niiice."

Kylie stunned fans with a series of sexy snaps during her Aspen vacation.

At one point, she stripped down to her tiny black bikini – the same one she wore in the hot tub snaps – covering up with just a robe as she left fans' jaws on the floor.

She struck a series of sexy poses, putting her post-baby body on full display in the unconventional outfit which she paired with plush brown boots.

In the first snap in the bunch, the makeup mogul posed on what appeared to be workout equipment, with one arm above her head and her robe open to show her full chest, flat stomach, and curvy hips.

In a second pic, the Hulu star bent forward, toying with her shoe as she looked straight into the camera while wearing dark sporty sunglasses.

In a third pic, the mom-of-two posed seductively, raising one leg toward her chest and resting a hand on her fully exposed thigh while sitting on a piece of workout equipment again.

The final photo in the bunch showed Kylie laying outstretched on her wide-open robe.

She used one hand to play with the string of her bikini bottoms.

Her supporters flocked to the comments to weigh in, fawning over the sexy star.

"Screaming," Maguire Amundsen wrote, as one person chimed in: "Perfection on a plate."

"Stunning!" a fan reacted as another added, "Insane!"

"Travis won this life," someone else added referring to the star's baby daddy. 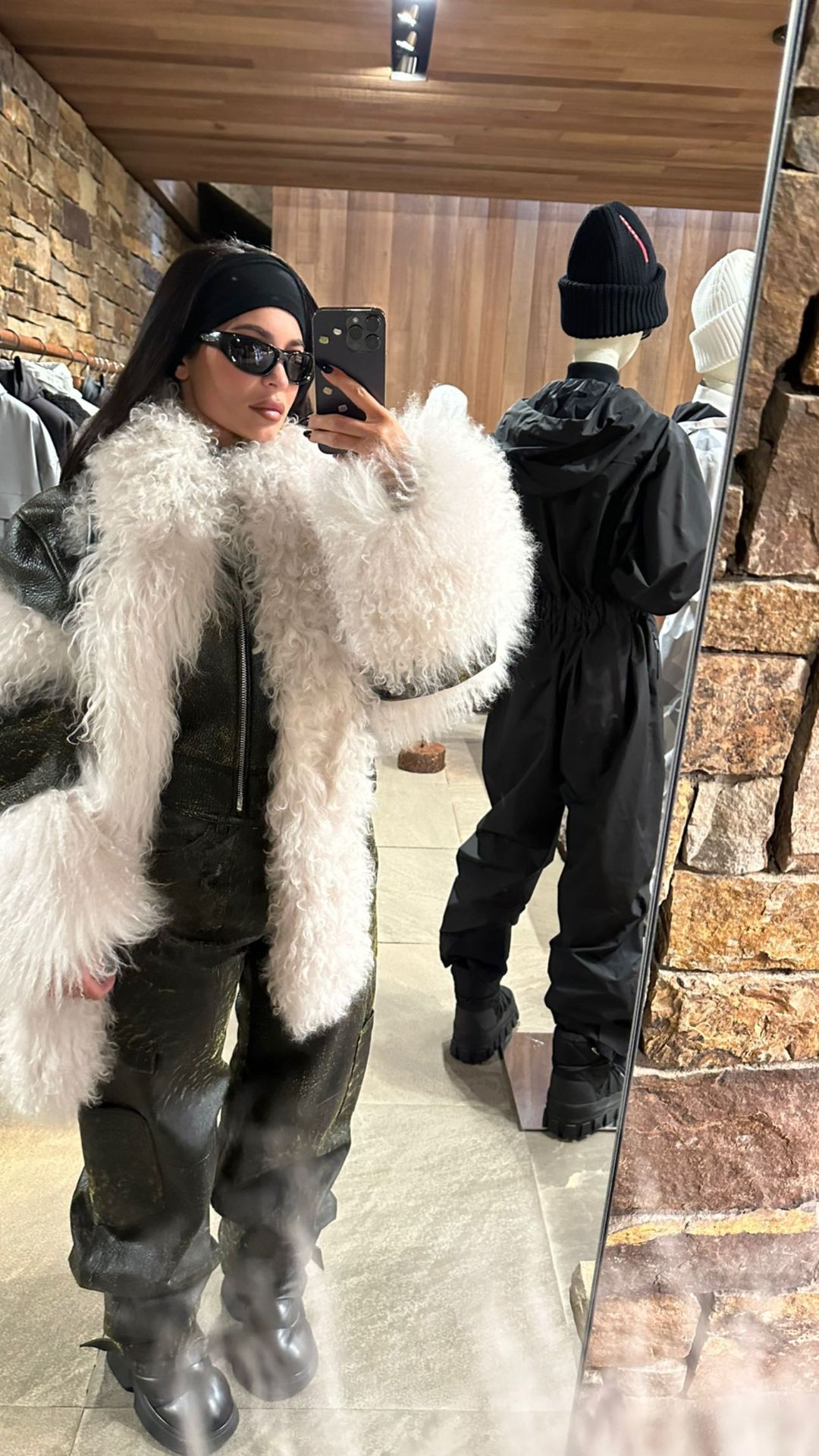 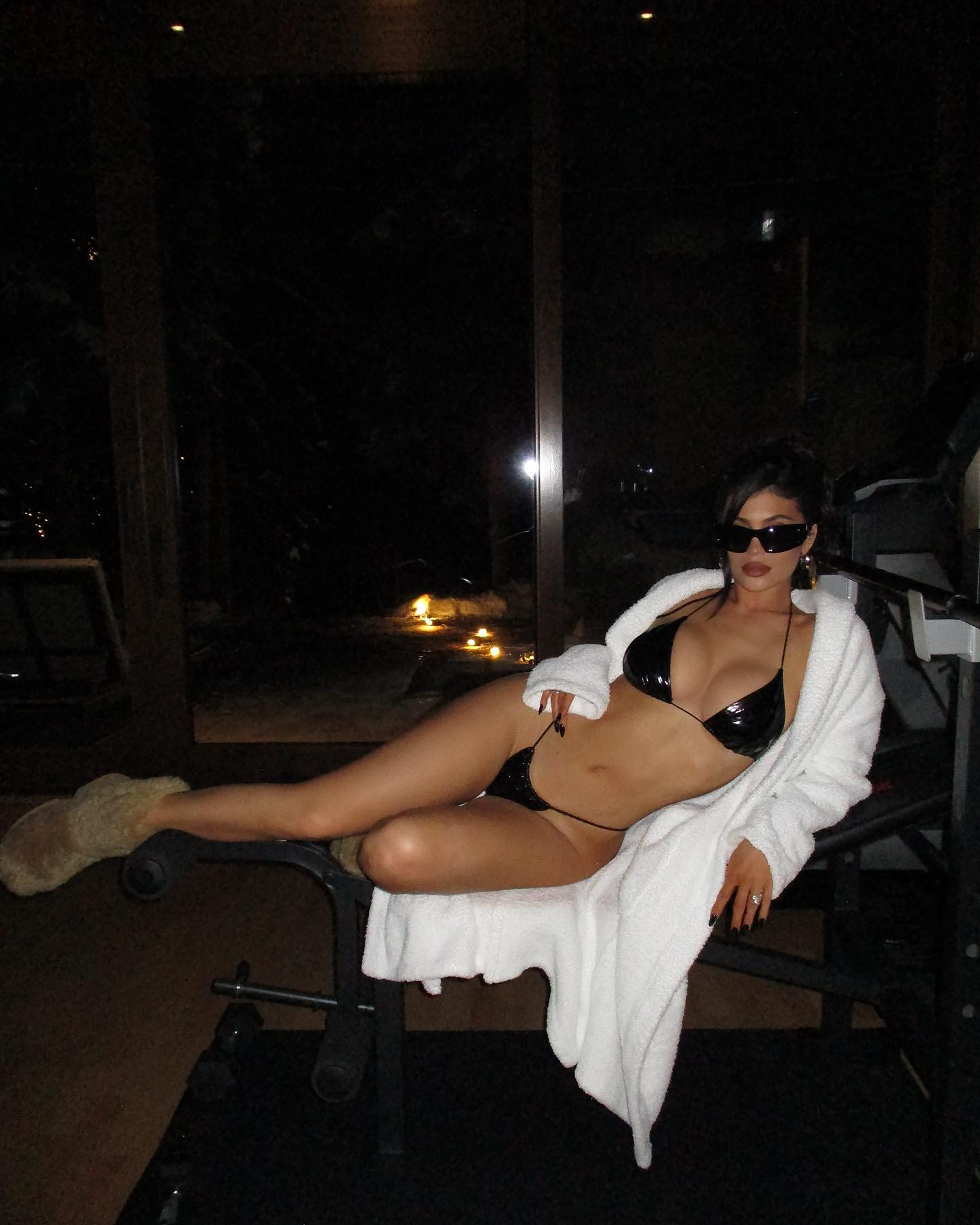 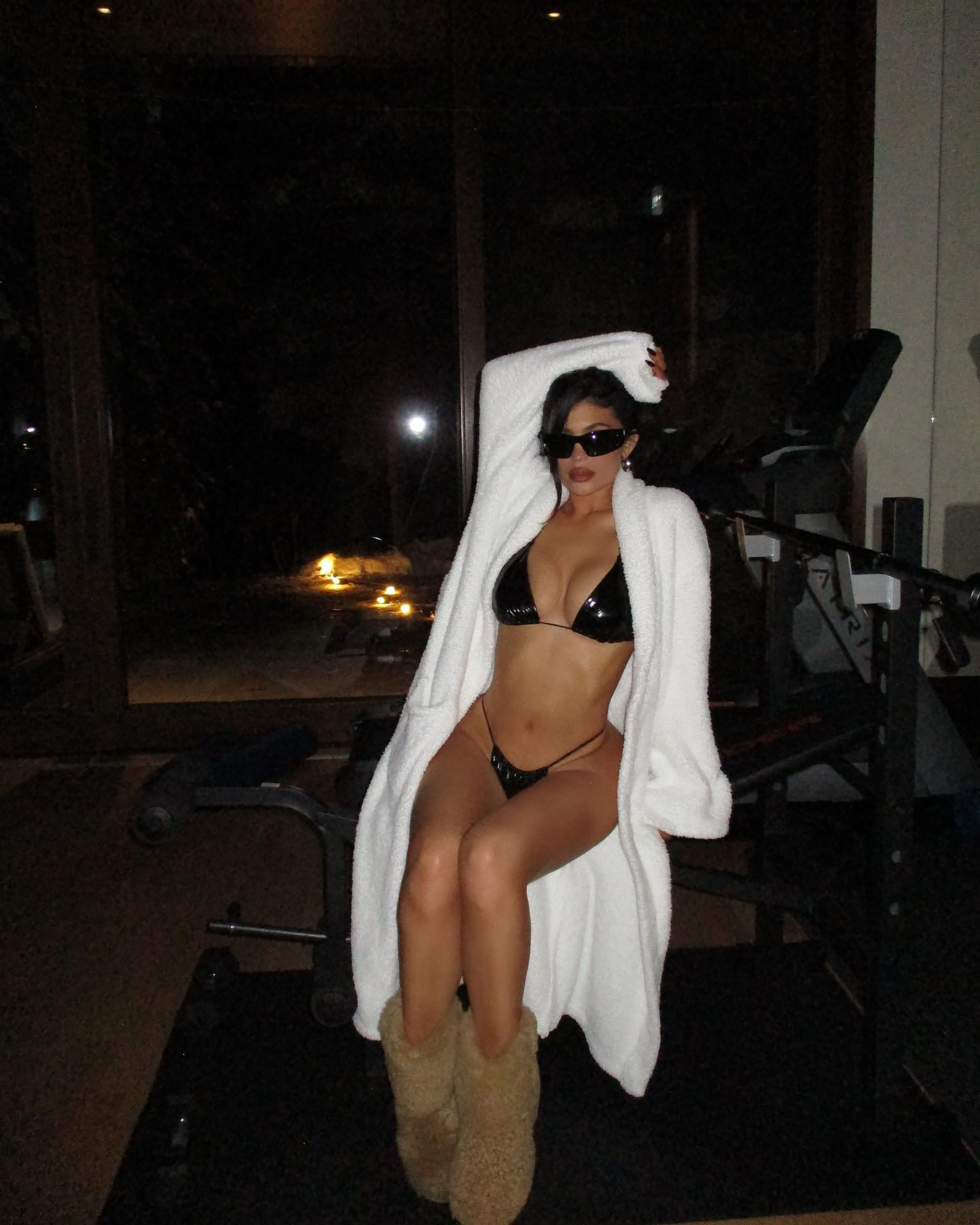