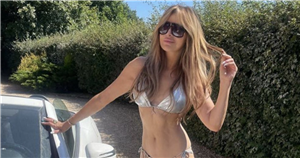 Lizzie Cundy is known for her glamorous snaps, and the heatwave was no different

The 54-year-old television personality took to social media to tell her 69,000 Instagram followers just how much she was enjoying the sunshine and hot weather.

The GB News weekend pannelist posted a picture of herself in a tiny silver bikini as she played with her lucious hair and popped one leg up in a suggestive posture as she showed off her ageless and slender figure.

READ MORE:'Sleazy' Boris Johnson is 'Donald Trump on a budget' and must go, claims Lizzie Cundy

The radio host cheekily smiled at the camera as she posed in her stunning metallic swimsuit in her matching high heels as she leant against the convertible car in her driveway allowing her long hair extensions to take in the light from the optimal angles.

She then posted a further two pictures of herself sitting inside her luxuriusly plush home on a quilted chair showing off two styles of her new long hair extensions as she got ready for the day's filming for a secret Channel 4 project.

She captioned the post: "It’s not what you wear, it’s all about the hair !! …I’m all hair ready for filming a new @channel4 show today."

This comes after the former WAG slammed the infamous Wagatha Christie libel case between Rebekah Vardy and Coleen Rooney.

She explained on an appearance on GB News breakfast: "it was so unnecessary and also, you know, she [Rebekah] kept blaming everyone else, it's the PR’s fault and then the other story on Peter Andre… There were more twists and turns than a Grand Prix race at Monaco.

She continued: “Coleen wants to be vindicated saying look, I had a good reason to put this out there and it was for the public interest.

Lizzie added: “I think the lawyers will be the winners. You'll see them in Barbados with big extensions, I think, after this.”