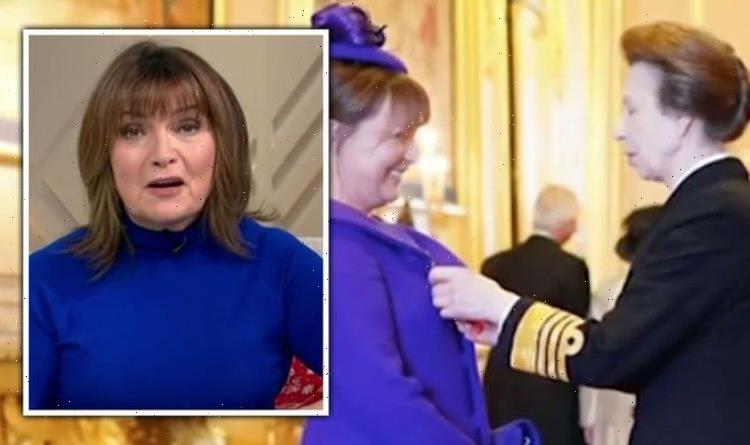 Lorraine Kelly received a CBE on Wednesday and was invited to Windsor Castle to be presented with the honour by Princess Anne. The ITV presenter revealed she’d had an amazing time but admitted she “couldn’t remember” exactly what she said to the Princess Royal because of the excitement.

Lorraine began: “Now yesterday was a bit of a day I went to Windsor Castle to collect my CBE from the Princess Royal, Princess Anne.

“Mark joins me now,” she added as her co-star began to clap.

She continued: “It was lovely – being there with everybody, listening to their stories, I’m going to be talking about an amazing lady who got honoured yesterday.”

Read more: ‘What a day’ Lorraine Kelly is a vision in purple as she’s awarded CBE

“I was wondering if you got to chat with other people,” Mark enquired.

“Not as much as you would because of Covid restrictions,” she explained.

“That meant I could take one person with me so I took Steve but it would have been lovely to take Rosie.

“He even wore his kilt,” Lorraine noted and Mark commented: “It’s exceptional and I love the colour of the jacket. Did he get that specifically?”

Lorraine answered: “No that’s ancient, he has had it for a long time.

“It was the Princess Royal,” Mark observed and the host added: “I shouldn’t say this but she’s my favourite.

“I do like her she works so hard under the radar for all these incredible charities and really makes a difference it was great and we talked about Scotland.”

“She loves Scotland do you know she supports Scottish rugby we talked about that and I was so giddy that I don’t really remember,” she admitted.

As the pair looked at a picture of Lorraine speaking to Princess Anne, Mark asked about the process of receiving the honour.

Lorraine explained: “A resplendent man because they’re all dressed beautifully and they’re so lovely because everyone is so nervous and they put a little hook on your jacket or your dress like a picture hook.

“Then when you go and the Royal [just pops the CBE on the hook].”

Lorraine showed viewers and Mark her CBE who noticed it had a pin on the back of it.

“Oh it’s weighty,” Mark noted. “You can’t have the Princess Royal trying to put that on the back.”

“They take it off, put it in a box for you, it’s all gorgeous,” Lorraine remarked.

Lorraine airs on ITV on weekdays at 9am.