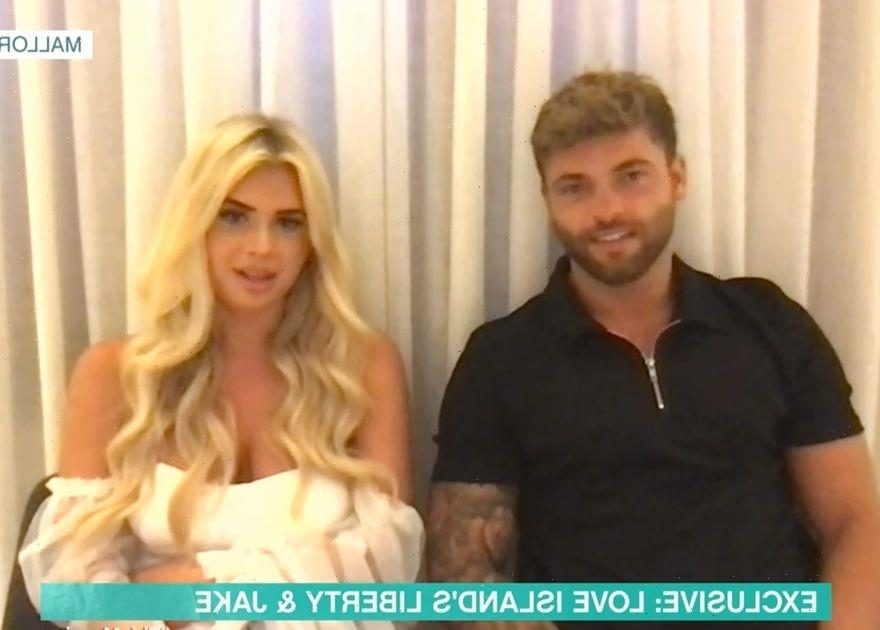 Former Love IslandersJake Cornish and Liberty Poole were asked to kiss live on This Morning on Monday.

Jake, 24, and Libby, 21, appeared on the ITV daytime show after their shock decision to leave the villa on Friday night's episode.

The couple spoke to Eamonn and Ruth about their decision, but Eamonn was keen to get the two back together.

In a cringe-worthy moment, Eamonn asked the couple at the end of the interview, "Are you two not tempted to have a little cuddle, a little kiss?

Both Jake and Liberty awkwardly laughed and looked very uncomfortable.

Shifting in his chair, Jake asked Eamonn, "What… now?"

Liberty hid her face from the camera and started to hide behind her hands.

The blonde beauty had nothing to say but, "Err…"

The TV host's wife said, "You've given Liberty the ick now, she's got the ick again. That's Eamonn's fault he's given you the ick."

Viewers at home were cringing at Eamonn's forwardness.

One fan tweeted, "Ehhh that was awkssss! No Eamon, Liberty didn’t want to give Jake a little cuddle or kiss."

Another said, "Jake & Liberty look like they’ve been taken hostage. They clearly don’t want to be there or on #ThisMorning."

Liberty had previously said that Jake had given her the ick on the Love Island Villa.

When Ruth asked what had caused it, Liberty said it was gradual, but eventually "the energy felt off".

She said, "After we got out of the honeymoon stage we were quite different."

She supported Jake and Liberty's decision commenting, "When you’re in there it’s very intense."

Amy argued that having her heart broken on the show was tough but it taught her a valuable lesson about self-love.

Offering her advice to Liberty, Amy said, "Liberty will know what she’s worth now."

The series finale of Love Island airs on Monday 23 August.

This Morning airs weekdays from 10am on ITV and ITV Hub