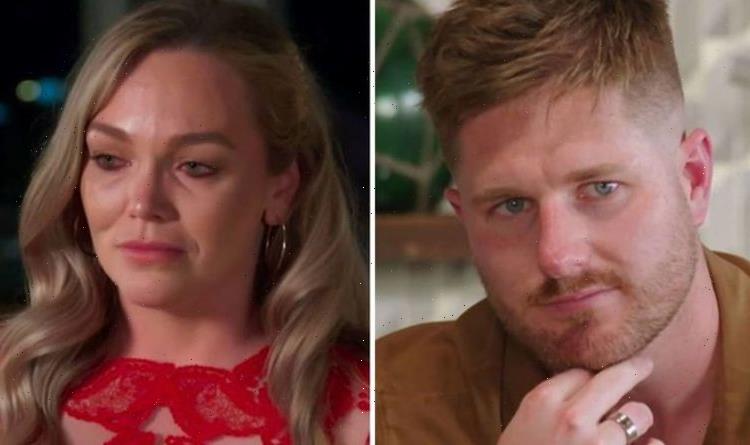 Married at First Sight Australia season eight is almost over in the UK with the second half of the reunion airing on Tuesday, November 16, on E4. There has been non-stop drama since the couples walked up the aisle and declared their commitment to a complete stranger. At the heart of most of this scandal has been radio host Bryce Ruthven.

Bryce Ruthven was paired with Melissa Rawson and initially, viewers were happy to see them together.

But after MAFS Australia showed various scenes including Bryce commenting how his new wife wasn’t his physical type and threatening to walk out when she questioned his motives, fans quickly turned against him.

More fuel was added to the fire when Samantha Harvey told Melissa that she knew Bryce still had a girlfriend on the outside that he was texting, something he has strongly denied.

This came out on the Boys and Girls Night which in turn led to Bryce calling the police the next day.

During an interview on Australian radio show Hit, Bryce and Melissa told of how the producers kept them apart and took away their phones so they couldn’t contact one another.

Bryce explained: “She [Melissa] comes in and I see her, looking as she was, just absolutely shattered, found out about the stuff [Samantha’s accusation] and I walked to the producers’ room and said ‘This is why you’ve kept her here? You’re playing with someone’s mental health.’

“They kept us separate for about half the day and I ended up sneaking out…no wallet, no phone and found a stranger and asked ‘can I have some money? I want to make a call on a payphone.’

“I called my parents, mum, dad this is what’s happening. [They said] ‘We’re all the Gold Coast we can’t help you, call the police Bryce.’ So I did.”

Bryce continued to explain that he called the police as he was “begging” the producers to let him go but they refused.

“I said to them ‘guys I’m done with this, we’re fine, we’re going to do something outside, [they said] your storyline’s not done, this isn’t done.’ It’s past a TV show”.

Viewers complained to ACMA (Australian Communications and Media Authority) when the show was initially airing in Australia.

They wanted Channel 9 to apologise for airing “triggering” content but an investigation by the ACMA cleared the network of any wrongdoing.

Filming for season eight took place more than a year ago so fans do know who are still together.

One of the only couples to remain in a relationship were Bryce and Melissa who are still going strong.

As with all couples, the marriages on the show are not legally binding.

So earlier this year, Bryce decided to take that next step and proposed to Melissa during a helicopter ride.

Since then, the couple have also bought a dog and moved in together.

Last month, Bryce and Melissa even started their own family, welcoming twin boys into the world.

The MAFS Australia stars decided to call their newborn children Levi and Tate.