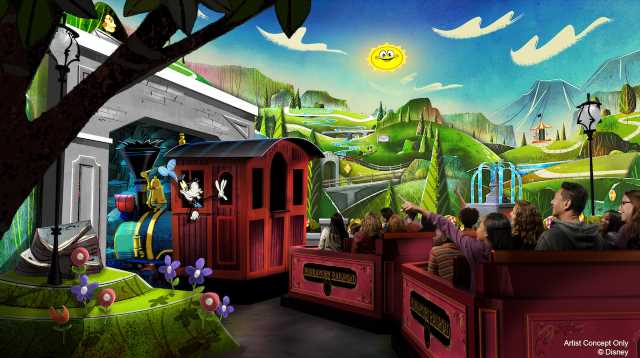 While he’s been a mascot for the parks for decades, neither Walt Disney World or Disneyland have had a Mickey Mouse-themed attraction. That changes with Mickey and Minnie’s Runaway Railway, coming to Disney World’s Hollywood Studios park and Disneyland next year. New details about the ride were revealed at the D23 convention today and here’s what you need to know.

The new reveals were brief but exciting, focusing mostly on concept art of the ride, including its queue and its entrance.

The Hollywood Studios version of the ride will replace The Great Movie Ride and will be housed in the iconic Chinese Theater building. Here’s what the new entrance will look like:

The Disneyland version will be built in the Toontown area and the entrance for the west coast location was revealed during the panel:

The panel also revealed some art from the ride’s queue line, which looks appropriate silly and cartoonish:

An official description from the Disney Parks Blog shed some light on not only the plot of the ride, but also what you’re seeing that queue art above:

The action takes place at the El CapiTOON Theater, where Mickey and Minnie are premiering their newest short, “Perfect Picnic.” Before you enter the cinema, you’ll experience a special exhibit created by the Toontown Hysterical Society featuring costumes and props from the toon world.

While the ride is still under construction and no footage could be shared, Disney did share two images of Imagineers hard at work on the attraction:

Here’s how the attraction was previously described:

This first major Mickey-themed ride-through attraction at Disneyland park will put you inside the wacky and unpredictable world of a Mickey Mouse cartoon short where anything can happen! Once you step into the cartoon world of Mickey and Minnie, you’ll board a train with Goofy as the engineer. Then, one magical moment after the next leads you to a zany, out-of-control adventure filled with surprising twists and turns.

Exact release dates were not announced, but the Hollywood Studios edition is expected to open in early 2020, with the Disneyland version coming in 2022.