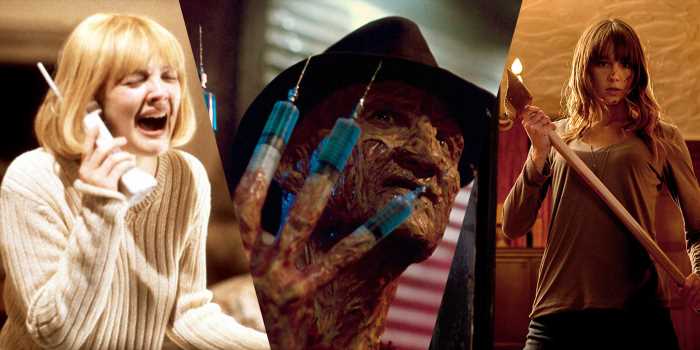 (Welcome to Now Scream This, a column where horror experts Chris Evangelista and Matt Donato tell you what scary, spooky, and spine-tingling movies are streaming and where you can watch them.)

Matt: My life still isn’t cobbled back together after moving cross-country, so Chris is letting me slide with one more “random selection” week because he’s a top-notch guy. You try scheduling movers, remembering to turn your electricity on, AND taking time to curate a selection of themed streaming horror flicks. Alright it’s not that hard, but hey, take a pass when you can. In any case, thanks for reading and I hope these columns have brought new discoveries into your horror-lovin’ lives!

Chris: Matt and I racked our brains for a theme this week, but I just got back from vacation and I’ll be honest: my mind is mush. So instead, we decided to go theme-less, like the naughty boys that we are.

Matt: Y’all in the mood for some new-age Nunsploitation? Darren Lynn Bousman’s St. Agatha exploits “Magdalene Laundries” – where pregnant women could seek refuge – by turning places of compassion into houses of horror. Mark Sayfritz’s score chants ritualistic verses as strings pluck an enraged and thorny score, religion used as a mask to hide nefariousness. Themes of gaslighting and kidnapping aren’t hard to follow, as the “Sisters of Divinity” abuse those held within unholy walls. Bousman doesn’t rewrite Catholic horror scriptures, but works well within the confines of blasphemy, religious duality, and the questioning of faith in a doomed place of worship.

Chris: Of course, Matt just had to get one title in here I haven’t seen, and make it the first one. Typical Hollywood Matt Donato.

Matt: In 1996, Wes Craven and Kevin Williamson brought a reckoning to horror. Scream asked audiences, “What’s your favorite scary movie?” After exiting their favorite multiplex cinemas, some audience members probably answered Scream. Ghostface came along and not only reinvigorated teenage slasher tropes, but introduced metatextual horror still very much alive today. Everyone has their favorite memory. David Arquette’s bumbling Deputy Dewey, or Jamie Kennedy’s rental store clerk wisdome, or Courteney Cox’s hard-hitting crime journalist. Craven is responsible for so many iconic horror titles, and Scream stands as one of his most infamous. A film hinged on the inability to trace cell phone calls in 1996 efficiently, but goshdarnit, there’s still too much to appreciate despite outdated technology.

Chris: I’ve never seen this. Just kidding! Of course I’ve seen Scream, the film that kick-started the slasher revival and launched a series of self-referential horror films. It still holds up.

Matt: I waffle on this thought often, but as of this post, Dream Warriors is my favorite Freddy sequel. Is it thanks to Dokken’s rad theme song? Heather Langenkamp’s return? Gnarly and varied kills? Probably the latter, given how Phillip’s marionette death – where Freddy tugs his veins like puppet strings – causes me to turn ghost-pale every time. You’ve also got Patricia Arquette’s debut, television Freddy, and a host of other A Nightmare On Elm Street moments that define Robert Englund’s legacy as horror’s resident nightmare maestro. Shudder’s streaming a bunch of ANOES sequels, but this one takes the cake.

Chris: I know people like to cite Wes Craven’s New Nightmare as the best Elm Street sequel – and to be clear, it’s very good! But for my money, Dream Warriors is the best of the bunch. Because in my dreams I’m beautiful…and bad!

Matt: Give me a chance to write about You’re Next and I’ll do it. People debate top home invasion films like The Strangers and Funny Games, but You’re Next would be my nominee. Adam Wingard wrangles a cast of indie horror stars at the top of their game, then pits them in a deadly and unruly hide-and-seek game. From blender kills to Wingard’s uptempo energy, family drama gets a brass-knuckle punch in the teeth. Black as night, comical without fault, and responsible for making animal masks acceptable Halloween costume accessories. I *love* this movie almost as much as I love DeLorian Royal’s “You’re Next” remix (my go-to background writing jam).

Chris: A lean, mean nasty home invasion flick that has a kick-ass “final girl” – and Barabra Crampton! What’s not to love?

The Collection
Now Streaming on Starz On Demand

Matt: I’ve already dished on The Collector around these parts, so now let’s continue with The Collection. Patrick Melton and Marcus Dunstan expand from “Saw during a home robbery” to “Saw but as a slasher flick.” In the first scene alone, a dance floor meatgrinder turns some hipster underground club into a blood-slathered slaughterhouse. Nothing about this sequel wants to replicate, only innovate. Cleverly subverting “torture porn” classification as this science experiment of a slasher hybrid that’s gruesome and spiteful. Thank heavens we’re getting a third chapter in “The Collector’s” ongoing saga, with Josh Stewart returning. One of the more undersung horror franchises still evolving through today’s genre landscape.

Chris: The Collector films are wildly underrated, and The Collection take the ideas from the first film and cranks them up in an enjoyably disturbing ways.