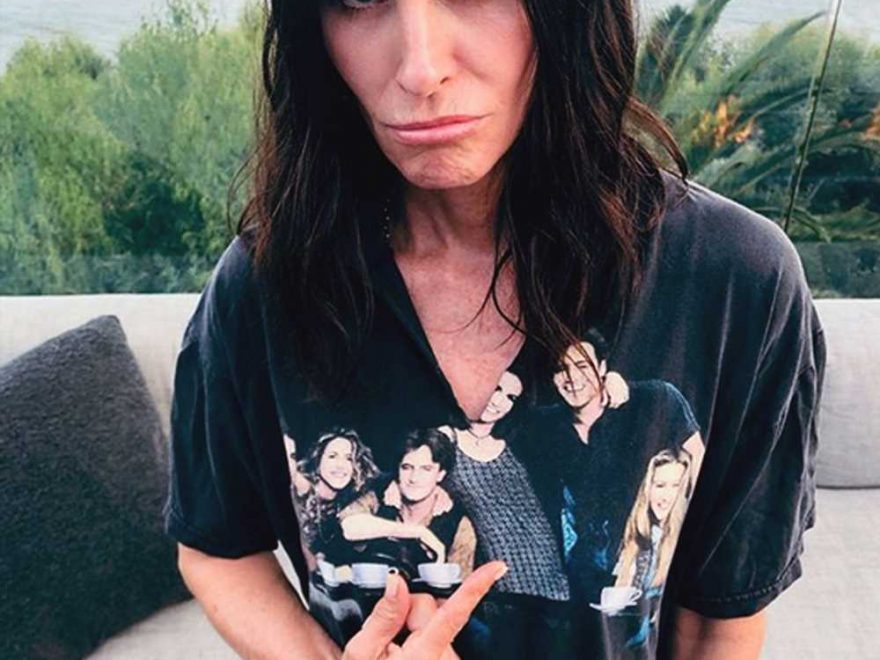 The Friends actress, 55, couldn’t help but share her disappointment to Instagram Monday after noticing her sitcom character, Monica Geller, was cropped out of her t-shirt which featured the rest of the cast.

The gray graphic tee, which looks like it was once scoop neck, was cut into a v-neck — and unfortunately, Cox’s face suffered from the alterations.

“Some people will do anything for a v-neck,” the actress captioned the photo, adding the hashtags, “#ouch,” “#crewneck,” “#boatneck,” and “#flashdance.”

Cox’s post racked up comments of disappointment from additional Friends fans and celebrities.

“Haha that’s how you can make the cut and not make the cut at the same time! Poor Monica 😝,” chimed writer and director Murray Cummings.

The actress frequently delights fans by posting Friends content on her social media — including reunions with her former costars.

For the Fourth of July, the actress posted a star-studded selfie with her friends, including her on and off-screen BFF Jennifer Aniston.

Fellow Friends star, Lisa Kudrow, gushed in the comments over her pals Cox and Aniston, 50, celebrating the holiday together, writing, “Awww. happy 4th!”

In late June, the internet went wild when the actress shared a photo of her, Aniston, and Kudrow, 56, hanging out.

“Trying to figure out what to say on Instagram….#gotnothing #friends #girlsnight,” Cox captioned the photo of the three ladies, who have remained close friends since their days as Monica, Rachel, and Phoebe ended in 2004.

One week before that, the trio geared up for another selfie together, kicking off the celebrations for Cox’s 55th birthday on June 15.

“How lucky am I to celebrate my birthday with these two??? I love you girls. So much ♥️” the actress wrote.

While the stars of the show remain close friends, fans hoping for a reunion or reboot series needn’t hold their breaths.

“People ask us all the time, ‘Will we ever do a remake?’ That was a story about these group of people that are friends in their 30s who are finding themselves. I don’t know if there’s a way to redo it,” Cox told PEOPLE in October of last year.