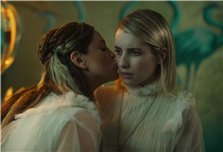 Unspooling like the candy-coated dystopian design baby of “Midsommar” and Tim Burton’s “Alice in Wonderland,” the first trailer for the female-fronted “Paradise Hills” is a veritable feast of celebrated talent. The feature filmmaking debut of Spanish filmmaker Alice Waddington, the film is anchored by some of the buzziest actresses working in indie film: Emma Roberts, Milla Jovovich, Danielle MacDonald, Eiza Gonzalez, and Awkwafina. Waddington directs from a script co-written by fellow Spanish filmmaker Nacho Vigalondo, best known for 2017’s Anne Hathaway vehicle “Colossal” as well as his work with the cult horror anthology collective Bloody Disgusting.

Per the film’s official synopsis: “On an isolated island, Uma (Roberts) wakes up to find herself at Paradise Hills, a facility where high-class families send their daughters to become perfect versions of themselves. The facility is run by the mysterious Duchess (Jovovich) where calibrated treatments including etiquette classes, vocal lessons, beauty treatments, gymnastics and restricted diets, revolve all physical and emotional shortcomings within two months. The outspoken Uma finds solace and friendship in other Paradise Hills residents — Chloe (McDonald), Yu (Awkwafina) and Mexican popstar Amarna (Eiza Gonzalez). Uma soon realizes that lurking behind all this beauty is a sinister secret. It’s a race against the clock as Uma and her friends try to escape Paradise Hills before it consumes them all.”

In his mostly positive Vulture review, Nate Jones wrote: “‘Paradise Hills’ truly has everything: brainwashing sessions on top of a carousel horse suspended 40 feet in the air; lesbian subplots that emerge out of nowhere; Milla Jovovich as a Nurse Ratched type with magical powers; editing that might be elliptical, or might just be bad. But the third act at least is full of pleasantly spiky twists that suggest more interesting ideas and world-building than the rest of the movie gives us.”

“Paradise Hills” premiered at the 2019 Sundance Film Festival in the forward-looking NEXT section. While Waddington has story credit, the sci-fi feminist fable was written by Vigalondo along with Brian DeLeeuw (“Daniel Isn’t Real”). Adrián Guerra and Núria Valls produced under their Nostromo Pictures banner.

Samuel Goldwyn Films will release “Paradise Hills” in theaters and digital on November 1, 2019. Check out the first trailer below.