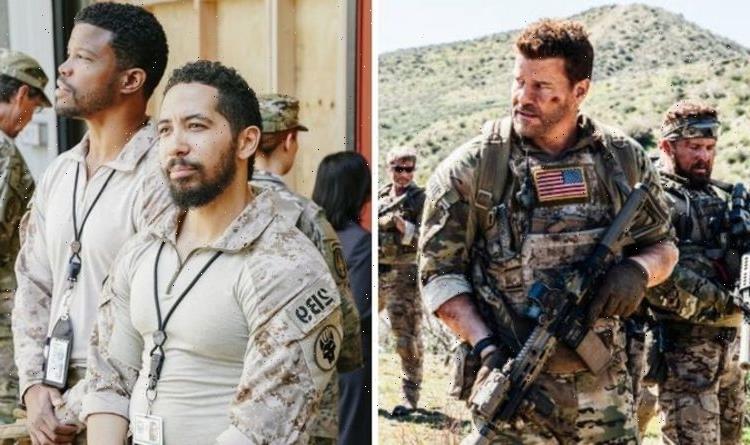 SEAL Team made its huge move from CBS to Paramount Network in November and despite this fans will be faced with another delay from the series. The military drama’s fifth season has been a huge hit for fans, however, they will be forced to wait until 2022 to find out the fate of their favourite characters.

Fans were disappointed to discover episode 11 of SEAL Team won’t stick to its regular schedule and air on the network.

Unfortunately, viewers will have to wait until January to see Jason Hayes (played by David Boreanaz) and the rest of the Bravo team on screen again.

CarterMatt.co.uk suggested the show could be taking a hiatus to avoid the competitive holiday season.

With the rise of Christmas movies during this time of year, viewers are likely to be in the festive spirit and avoid their regular shows.

Thankfully, fans of the action-packed military drama won’t be left to fill in the blanks as the show released a trailer, teasing what’s to come.
It looks as though it will immediately pick up where it was left off, as they go ahead with the challenging no-contact order.
In the previous episodes, Jason told his team they would be: “no oversight, no communications, no exceptions. Ranging from one to six months.”
The trailer also hints there could be a divide in the brotherhood as Clay Spenser (Max Theriot) revealed to Ray Perry (Neil Brown Jr): “Jason brought that building down on us and put us all in the hospital.

In what looked like a mission gone wrong, there was also a clip of Jason pacing outside a hospital room, with no clue of who is in the bed.

Ray was shocked by Clay’s admission and warned him not to say a word to anyone.

The 30-second teaser clip also showed Jason criticising Ray, telling him: “If you wanted to stay safe you should’ve stayed at home.”

Then in another scene Jason walked away from Ray and said: “Keep away from me.”

Fans have also speculated this season the no contact order could be the last members of the Bravo team including Ray, who was finally dealing with his PTSD.

After being held captive and beaten by enemies while on deployment, he suffered a huge mental breakdown which also almost saw the end of his marriage.

With the no contact order completely limiting his communication between his wife and therapist, fans are certain he may decide to leave early.

Before news of deployment Clay’s wife shared pregnancy news with him and viewers will remember previous seasons where he stated he would take time out for his family.

Clay’s father is also battling cancer and the no-contact order could be the motivation needed for him to quit and stay with his family.

When SEAL team returns to screens in the new year there will be three episodes until the finale, and the network has yet to release information about a potential season six.

While the front-line could be detrimental for Ray and his fragile state of mind, fans are certain it could also result in a divorce with his wife.