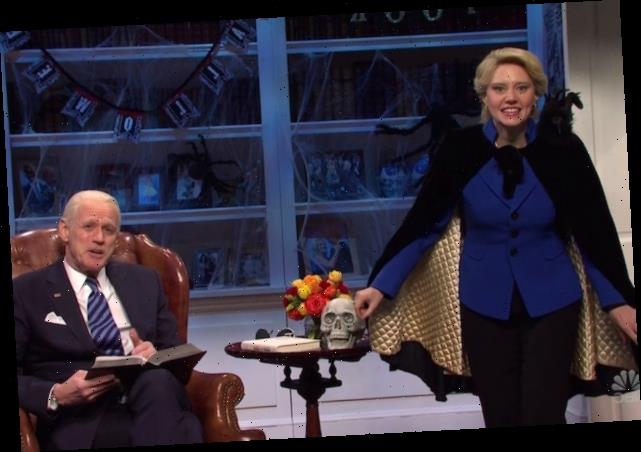 The opening sketch found Jim Carrey’s Biden on hand to read aloud the Edgar Allan Poe classic The Raven. What followed was a heavily revised poem used to address the American electorate a little more than 48 hours before they head to the polls.

“I was writing my acceptance speech when something stopped me with its screech,” Biden said. “‘Twas a knock upon my chamber door. It ’twas someone still a little sore.”

That’s when Clinton entered, costumed as the titular raven, and warned Biden that President Trump could steal the election. When Biden scoffed at Clinton’s proposal and suggested all the votes would be tallied, the former Secretary of State countered, “Just like Al Gore?”

This time would be different, though, Biden declared. The American people know he has a plan. “But your real advantage is you’re not a woman,” Clinton said. “You’re a man!”

After her exit, Biden was visited by political pollster Nate Silver (Mikey Day), Trump supporters Ice Cube (Kenan Thompson) and Lil Wayne (Chris Redd), and Senate Majority Leader Mitch McConnell (Beck Bennett) — all of whom were present to rain on the former Vice President’s parade. He was eventually joined by his running mate, Sen. Kamala Harris (Maya Rudolph), who helped deliver a final (and somewhat hopeful) plea to the nation.

“Use your voice and use your vote,” Harris said. “Democracy will represent.”

Added Biden, “And this Daylight Savings Time, let’s gain an hour and lose a president.”

What did you think of SNL‘s final cold open ahead of Election Day?