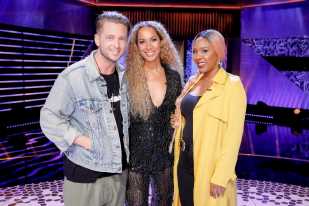 Last No. 1 single was Macklemore’s “Shadow”

Leona Lewis has become the sixth artist this summer to score a chart-topping single from NBC’s songwriting competition series “Songland.”

Lewis’ “Solo Quiero (Somebody to Love),” which features Cali y El Dandee and Juan Magán, shot to the top position on the iTunes Latino Chart on Thursday morning after audiences first heard it on Wednesday night’s episode. The song was written by “Songland” contestant Rozee and producer Ryan Tedder.

Artists Macklemore, The Jonas Brothers, John Legend, will.i.am, and Kelsea Ballerini have all had hit singles from the first season of the competition series, which premiered on May 28.

The last song to land at the top of the charts was Macklemore’s “Shadow,” written by Iro, which made it to No. 1 on the iTunes Hip-Hop/Rap chart on Aug. 15.

Before that, The Jonas Brothers landed a hit with “Greenlight” by Able Heart, which made it all the way to No. 2 on the iTunes Overall Chart and the Pop Chart, but wasn’t No. 1 due to Taylor Swift’s “You Need to Calm Down.”

Ballerini found a hit in “Better Luck Next Time,” which was written by Darius Coleman, and rose to the top of the iTunes Pop Chart two days after it was released on June 11, and hit No. 2 on the iTunes Overall Chart.

On the June 2 episode, will.i.am found a Black Eyed Peas hit with Adam Friedman’s “Be Nice,” which rose to No. 1 on the iTunes Rock Chart and No. 14 on the Overall Chart the next day.

On the first episode, Legend chose “We Need Love” by songwriter Tebby Burrows, which rose to No. 1 on the iTunes R&B charts and No. 6 on the iTunes Overall Chart the day after the episode aired.

Watch a video of Lewis performing the song above.

10 Films Directed by Women to Check Out This Fall, From 'Frozen 2' to 'Little Women' (Photos)

From Heller to Gerwig and beyond, the opportunities for female filmmakers to shine are growing

After years of criticism over the lack of gender diversity among directors in Hollywood, studios are finally starting to hire more women. 2019 is the first year that all major studios are releasing at least one film directed by a woman, and this fall’s slate has plenty of women contributing movies, from animated blockbusters to potential Oscar contenders. Here are 10 to look out for.