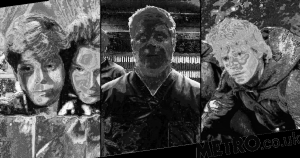 Sean Astin and his impressive back catalogue of roles has been trending on Twitter as fans inadvertently created what will now be forever known as Sean Astin Appreciation Day.

The beloved Lord of the Rings and Stranger Things star received a huge wave of attention on Friday after an adorable photo of him cuddling an otter went viral on Twitter.

The wholesome tweet then started a chain reaction of appreciation tweets for actor who just seems so darn lovely.

As an integral part of several pop culture moments, fans have been lavishing praise on Sam for his iconic roles in the likes of The Goonies, Toy Soldiers, Rudy, Encino Man and 50 First Dates.

The prolific actor was propelled back into the zeitgeist when he played the much loved Bob Newby in Stranger Things season two, with fans really missing his presence in season three this summer.

Sean has thanked fans for all the love, tweeting website Consequence of Sound: ‘Just talked with my wife, my brother and eldest daughter…this trending thing, today, for basically only a cute reason (otter) is just so lovely…thank you all.’

Many fans, mostly 90s kids, were annoyed that Sam was becoming known as ‘Sean Astin from Stranger Things’ rather than his career before starring in the Netflix series.

One fan wrote: ‘Sean Astin is Sean Astin from The Goonies, LOTR, 50 First Dates, Rudy before he has any affiliation with Stranger Things and thats on PERIOD.’

While another added: ‘I’m sorry but Sean Aston didn’t get through a booby trapped series of cave tunnels to steal One Eyed Willy’s treasures to save his house/town, to be known as “Sean Astin from Stranger Things”. Y’all I’m DONE. The disrespect!’

The takeaway from this is, the world clearly wants more Sean Astin our screens.

Preferably with some otters.