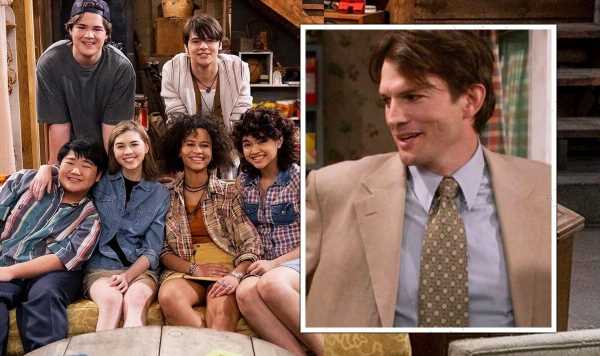 That 90s Show was a classic sitcom about a group of teenagers hanging out in one of the kids’ basements in the late 1970s. The show launched the careers of stars like Mila Kunis, Ashton Kutcher and NCIS’ Wilmer Valderrama and now it’s the next generations turn with the upcoming Netflix comedy. Express.co.uk has all there is to know about the cast of That 90s Show.

Red Foreman was the dad of Eric Foreman whose basement will once again be where the 90s children hang out.

Apart from That 90s Show, actor Kurtwood Smith is best known for playing Robert Griggs in Rambo III and Clarence Boddicker in Robocop.

Red is married to Kitty Foreman who is played by actress Debra Jo Rupp.

Friends fans will best recognise Rupp for playing Alice Knight-Buffay in the early series of the sitcom.

Leia Foreman is Red and Kitty’s granddaughter who stays at their house for the summer.

Actress Callie Haverda has been in The Lost Husband, Shut Eye and See Plum Run.

Eric was one of the original teenagers from That 70s Show who is now a dad to Leia.

Actor Topher Grace first rose to fame in the sitcom before going on to star as Eddie Brock in Spider Man 3, Edwin in Predators, Getty in Interstellar and David Duke in BlacKKKlansman.

Fans will be delighted to see Eric and Donna still together after all these years with a family of their own.

Actress Laura Prepon is now best known for playing Alex Vase in the Netflix comedy-drama Orange is the New Black.

Jackie was among the main characters in That 70s Show, famously played by Mila Kunis.

During her career so far since the sitcom, she has been in Friends with Benefits, Luckiest Girl Alive, Black Swan, Bad Moms and Ted.

In the series, Jackie had an ongoing romance with Michael Kelso, played by Ashton Kutcher who she married in real life in 2015.

Kutcher has been in No Strings Attached, Two and a Half Men, Jobs, What Happens in Vegas, Killers and Just Married.

Jay is one of the new kids in That 90s Show, played by actor Mace Coronel.

He is best known for starring as Dicky Harper in the Nickelodeon series Nicky, Ricky, Dicky and Dawn.

Fellow teen Nikki is portrayed by Sam Morelos who has been in the short Forgetting Nobody.

When Leia goes to stay with her grandparents, she soon befriends her neighbour Gwen.

Actress Ashley Aufderheide is best known for playing Mia in ABC’s Emergence as well as the movie Four Kids and It with Michael Caine and Russell Brand.

Teen actor Reyn Doi has been in Kidding, Adopted and Side Hustle, among other roles.

Disney fans will best recognise Maxwell Acee Donovan as Wesley Presley in the comedy show Gabby Duran and The Unsittables.

Other cast members include:

That 90s Show premieres on Thursday, January 19, on Netflix.