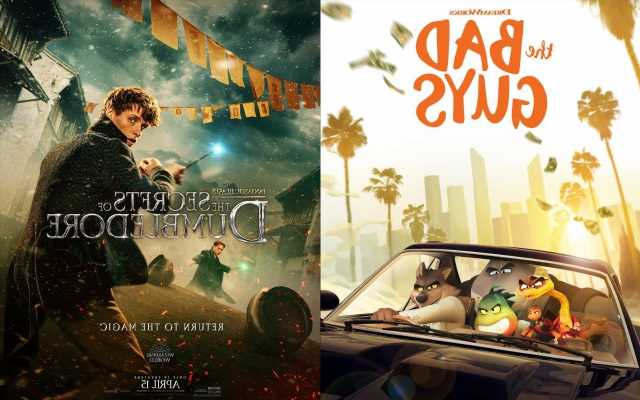 The no. 1 debut of the animated action-comedy movie proves that family films still work as ‘Sonic the Hedgehog 2’ also beats ‘Fantastic Beasts: The Secrets of Dumbledore’.

AceShowbiz -“The Bad Guys” has a triumphant box office debut. The animated movie easily defeats “Fantastic Beasts: The Secrets of Dumbledore” to open at No. 1 in North America with an estimated $24 million.

Based on Aaron Blabey’s children’s graphic novel series, the action-comedy is about a wickedly smart group of crooked animals who, upon being caught, pretend to attempt to reform themselves as model citizens as a new villain has his own plans. It received positive reviews from critics, holding an approval rating of 86% on Rotten Tomatoes.

” ‘The Bad Guys’ is a family thrill ride with new characters and an exciting story that theatrical audiences will be embracing for weeks and months as we finish out spring and head into the summer,” says Jim Orr, Universal’s president of domestic distribution.

“The Bad Guys” first-week ticket sales signal a continued resurgence for family moviegoing after a downturn during the pandemic. “The very positive critical and audience reaction to ‘The Bad Guys’ echoes the overperformance of our title at the domestic box office this weekend and deservedly so as this is a broad, action-packed, charming film with clever comedy for the entire family,” Orr adds.

He continues voicing his optimism of the theater business in general, “There’s reason for being more than cautiously optimistic. I think audiences this summer are going to be flooding into theaters.”

Another family-friendly film, “Sonic the Hedgehog 2“, even holds on to the second place with an estimated $15.2 million. It has collected $145.8 million domestically and $142 million overseas for a current worldwide total of $287.8 million.

“Fantastic Beasts: The Secrets of Dumbledore“, meanwhile, falls off sharply in its second weekend as it saw a 67% decline with an estimated addition of $14 million. It continues to perform better overseas, where it has grossed $213.2 million for a global total of $280.3 million.

There are other two newcomers in the top 5 this week, with “The Northman” placing fourth. The bloody revenge saga, which boasts an A-list cast including Nicole Kidman, Alexander Skarsgard, Anya Taylor-Joy, Ethan Hawke, Bjork and Willem Dafoe, earned approximately $12 million on its first weekend.

“We got to make a film that we wanted to make with a filmmaker we feel is part of the future of American cinema,” says Lisa Bunnell, head of distribution for Focus. “He’s got a very distinctive voice. He’s making film with original IP, not just going in: ‘Let’s make a sequel!’ “

“The Unbearable Weight of Massive Talent” debuts at No. 5 with an estimated $7.2 million after first launching to warm reviews at the South by Southwest festival. The meta comedy stars Nicolas Cage as a fictionalized version of himself.

“Every weekend is a building block in the recovery, but I don’t even want to call it a recovery. I think movie theaters are recovered. We’re pretty much there,” says Paul Dergarabedian, senior media analyst for ComScore, of the debuts of three new titles in the top 5. “Three newcomers were all well-received, and all of them found an audience.”