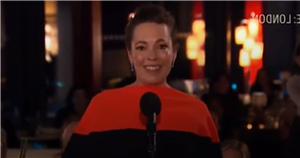 Netflix’s The Crown swept the floor at the 2021 Emmy Awards on Sunday as the hit show scooped seven prizes.

Olivia Colman’s Best Actress in a Drama Series win sparked a tear-jerking speech as the actress took the chance to remember her late father, who died during the pandemic.

Olivia, whose time playing Queen Elizabeth in the The Crown has come to an end, said: "What a lovely end to the most extraordinary journey with this lovely family,

"I loved every second of it and I can't wait to see what happens next."

The star then became teary-eyed as she added: "I wish my dad was here to see this. I lost my daddy during Covid, and he would've loved all of this."

The fifth season is set to debut later this year and will, for the third an final time, feature an all-new cast in playing the Royals.

Included in the new line up is Elizabeth Debicki, who was spotted looking the spitting image of her on-screen character Princess Diana, on set earlier in the month.

The 30 year old star is taking over the role from Emma Corrin.

“I think it’s amazing that from age 7, I would remember somebody who had no actual impact on my life as a child in Australia—and yet I was very aware of her presence in the world," she continued.

“I remember seeing her face on magazines. My mother was very aware of her, as I think a lot of women close to her age were. She really followed her quite intimately because she represented something extremely human and extremely symbolic.”