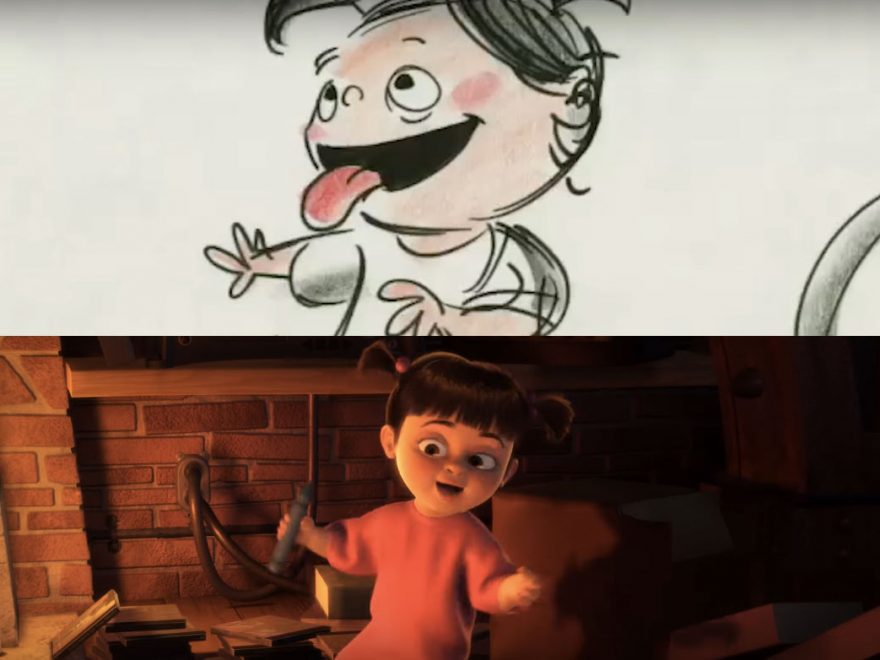 In this edition, see how the storyboards for an adorable scene in Pixar’s Monsters Inc. with Boo compare to the final cut of the movie. Plus, watch a trailer for Avengers: Endgame cut in the style of Quentin Tarantino‘s hotly debated Once Upon a Time in Hollywood, and listen as Gerard Butler breaks down some of his most memorable roles, from 300 to the recent Angel Has Fallen.

Monsters Inc. was only the fourth feature length film released by Pixar Animation, and when you see the storyboards used to plan the animated movie, you’ll see that the studio was still finding their creative footing. Unlike some of the other storyboard comparisons out there, the ones from earlier movies have many more differences in artistic style and design, both in the art and the layout of scenes. It’s clear that Pixar got better at this as time went on.

Mr. Krepshus is back with an impressive trailer mash-up, this time taking footage from Avengers: Endgame (and a little bit from Avengers: Infinity War) and cutting it in the style of the full theatrical trailer for Once Upon a Time in Hollywood. Some of the storybeats used for the edit don’t quite match as well with the footage used in the original trailer, but it’s interesting to see the Marvel movie have an entirely different kind of vibe.

Finally, GQ sat down with Gerard Butler during his publicity run for the recent action sequel Angel Has Fallen, and they had the actor break down some of his most memorable characters over the years. Of course, 300 is included, as well as the starkly contrasting Phantom of the Opera and Den of Thieves, not to mention the tearjerker P.S. I Love You and the romantic comedy The Ugly Truth, but he also covers both Olympus Has Fallen and London Has Fallen.