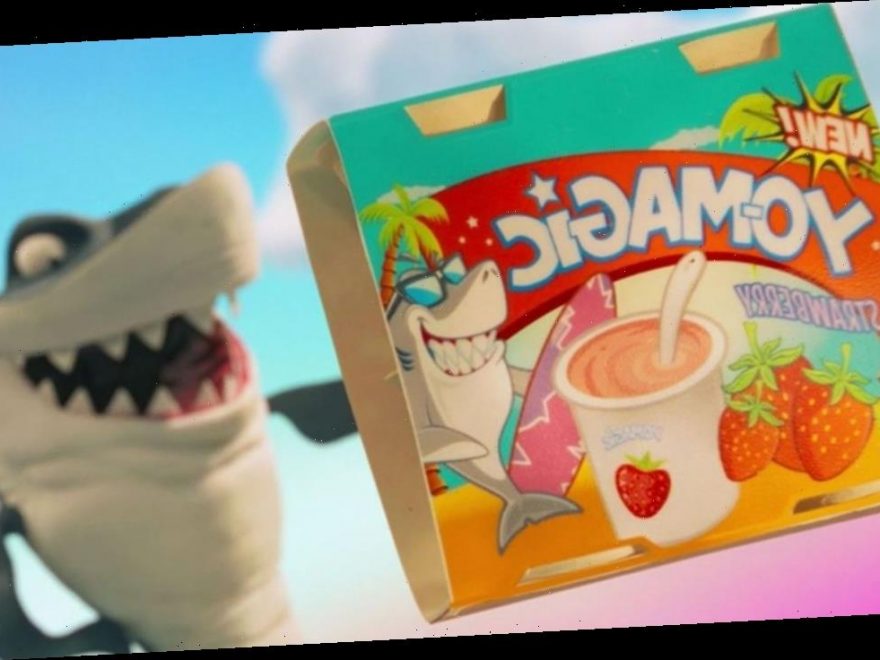 WandaVision has come to an end, and with it came a lot of unanswered questions. Where is White Vision? Was Wanda Maximoff really hearing her kids in that post-credits scene? When will we see more of Monica Rambeau’s powers? Suffice it to say it was a thrilling end for a thrilling show.

The Marvel series also included commercials that got creepier by the episode, but fans’ questions about the WandaVision shark commercial finally got answered in the last episode. And there was a hidden message that foreshadowed the events of the series finale.

With the exception of the last two episodes, WandaVision featured a new commercial every week. The ads were intended to hint at Wanda’s mental state within the hex, and every commercial contained a tiny clue about how she was doing.

The episodes got darker and darker as the season went on, and the shark commercial in episode 6 was one of the most unsettling. The ad was a stop-motion cartoon showing a kid stranded on a tiny island.

“I’m so hungry, I’d eat anything,” the kid, wearing a red shirt and blue shorts says.

“Hungry? I remember hungry. I used to feel like that all the time,” says a shark that pops out of the water.

“Snacked on Yo-Magic, bro! Now I have time to hang fin,” the shark replies.

Then the child pitifully asks, “Can I have some?” The shark gives them food, just for it to be a struggle to open the lid. Days pass as the child tries to eat the Yo-Magic yogurt, and eventually his face sinks in and he dies.

“Yo-Magic: The snack for survivors,” the shark says at the end. Yup, definitely unsettling.

Who is the bad guy in ‘WandaVision’?

At first, fans couldn’t figure out what the hidden meaning of this commercial was supposed to be. One theory was that the shark represented the real WandaVision villain. Rather than Wanda being responsible for all of the unexplainable things going wrong in the hex, fans theorized that the mishaps and ads could’ve been the work of an entirely different villain taking advantage of her powers.

That turned out to be true. Wanda and Vision’s next-door neighbor, Agnes, was revealed to be the witch Agatha Harkness. In episode 7, when Wanda hears a director talking behind the camera for the first time, it turns out to be Agatha. She was responsible for the Evan Peters Pietro appearing and for all of the unexplainable mishaps.

In episode 8, Agatha forces Wanda to look back at all of her past traumas so she can figure out how she got her powers. By the end of the episode, Agatha concludes that Wanda is destined to fulfill the prophecy of the Scarlet Witch.

What is Wanda doing at the end of ‘WandaVision’?

The WandaVision finale personified the shark commercial in Wanda and Agatha’s epic battle. Episode 8 taught viewers that Agatha has the ability to absorb the power of others, and she wants Wanda’s chaos magic for herself. In exchange for the powers, she offers to improve Wanda’s Westview spell and assure that she, Vision, Billy, Tommy, and the town residents can live together in peace.

“No one will have to feel this pain again, not even you,” she says. Wanda then attacks Agatha and they have an epic battle in a red-filled sky. She starts throwing her power at Agatha, seemingly agreeing to her deal.

The more power she hands over to Agatha, the more her body cripples. Her hands become black and her face sinks in, just like the kid in the shark commercial. In this moment, Agatha is literally feeding on Wanda’s magic.

The “Snacking on Yo-Magic” tagline became real. From the red shirt Wanda was wearing, to her body breaking down, to the villainous being “snacking” on magic, the shark commercial came to fruition.

But what Agatha didn’t notice was as Wanda was hurtling her power toward her, she was also casting a rune spell on the walls of the hex.

“In a given space, only the witch who cast them can use her magic,” Wanda says. “Thanks for the lesson.” She then takes her power back from Agatha and finally becomes the Scarlet Witch.

After Vision and their children heartbreakingly disappear along with her hex, Wanda goes off to a remote cabin where she learns about her powers. She’s seen relaxing on a porch with a cup of coffee, but she’s simultaneously astral projecting and learning about magic. The power she has!

From start to finish, WandaVision didn’t miss a beat.