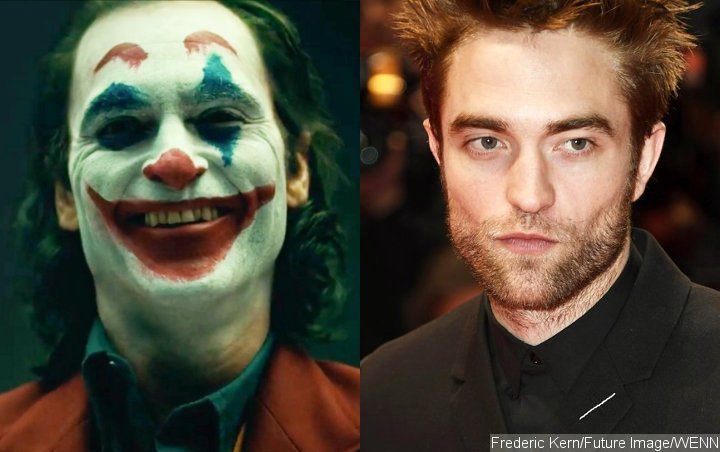 In other news, Rihanna, Ruth Negga, Eiza Gonzales and Ana De Armas have been named among fan favorites to play Catwoman in Matt Reeves’ upcoming movie ‘The Batman’.

AceShowbiz –Todd Phillips just poured cold water on a speculation that Joaquin Phoenix‘s Joker and Robert Pattinson‘s Batman would meet sometime in the future. After “The Batman” star Pattinson started the chatter with his interview, “Joker” director Phillips has dismissed the rumor.

“No, definitely not,” said “The Hangover” trilogy director when asked by Variety if Pattinson’s version of the Gotham superhero and Phoenix’s iteration of the famous villain will appear in a future film together.

During the interview, Phillips also addressed the possibility of Joker appearing in other DC films. “Oddly, in the states, comic books are our Shakespeare it seems, and you can do many many versions of ‘Hamlet’,” he explained with analogy. “There will be many more jokers, I’m sure, in the future.”

Previously, Pattinson was believed to have spilled plans of a Batman and Joker crossover during an interview with Variety. Writer Ramin Setoodeh noted during their conversation, the British actor made a comment about Phoenix, but asked retract it because it contained spoiler.

“At one point in our conversation, he offers a mundane comment about Joaquin Phoenix, who stars in ‘Joker’ (a movie he hasn’t seen yet), before asking to retract it,” Setoodeh wrote. He went on recalling, ” ‘Oh s**t,’ he says, adding that he’s not accustomed to thinking about spoilers. ‘I definitely should not say that. I’m so used to pretty art-house movies, where you can watch the movie three times and still not know what it’s about.’ “

In other Batman news, Heroic Hollywood recently reported that Matt Reeves is looking to cast a woman of color for the role of Catwoman in his upcoming movie “The Batman“. Zoe Kravitz was reportedly the director’s ideal choice for the part, but the actress is not available due to her busy schedule.

Fans have since taken to Twitter to voice their opinions on who should be playing Catwoman. Singer Rihanna, Ruth Negga (“Preacher“), Eiza Gonzalez (“Fast & Furious Presents: Hobbs & Shaw“) and Ana De Armas (“Blade Runner 2049“) are among the names thrown as potential contenders for the role, though some argued that the last two actresses, Gonzalez and De Armas, are not women of color. Singer Kehlani, meanwhile, suggested that actress/singer/dancer Teyana Taylor should play the part.

Vanessa Kirby, Vanessa Hudgens, Chloe Moretz, Kristen Stewart, Aubrey Plaza and Jodie Comer were previously rumored to be in the running for the coveted gig.